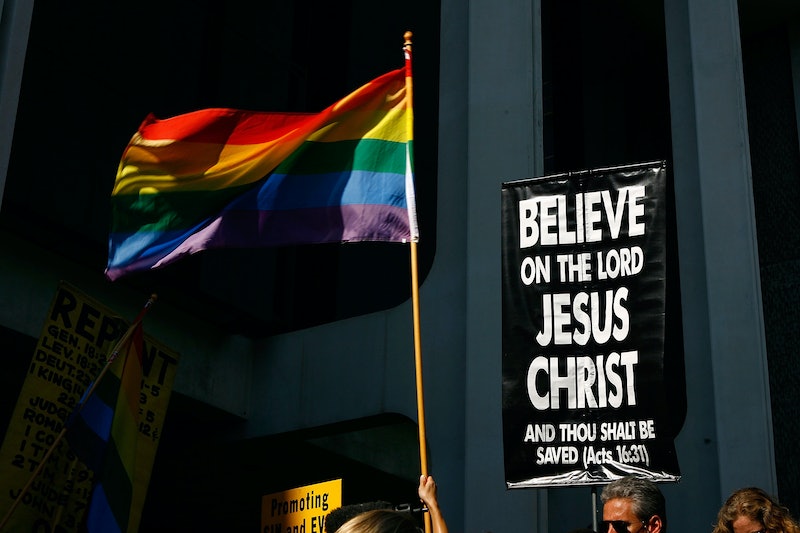 While states like Idaho, Florida, Kentucky and even Utah move toward a world in which gay couples can finally have equal rights, others are not so keen to progress. On Wednesday, a Louisiana federal judge upheld the state's gay marriage ban. He's the first federal judge to rule against marriage equality since DOMA — until now, all 21 other federal courts have chosen to strike down state bans, though many have been left in limbo pending appeals. The good(ish) news? The turnaround might push the issue to the Supreme Court more quickly.

Less than two weeks ago, a Florida federal judge summed up his decision to strike down the state's ban when he said: "Tolerating views with which one disagrees is a hallmark of civilized society." His decision was in keeping with a string of pro-equality rulings. But U.S. District Judge Martin Feldman bucked the nationwide trend — calling it "a pageant of empathy" — with Wednesday's decision to keep the Louisiana's ban on gay marriage, going so far as to uphold the state's refusal to recognize out-of-state same-sex marriages.

The language in his ruling is in sharp contrast to the uplifting messages of the federal judges before him. Not only did Feldman go for the gay-marriage-leads-to-incest argument — “Must the states permit or recognize a marriage between an aunt and niece? Aunt and nephew? Brother/brother? Father and child?” he asked — he also completely undermined non-biological families.

He wrote in his decision:

The fact that marriage has many differing, even perhaps unproved dimensions, does not render Louisiana's decision irrational. Nor does the opinion of a set of social scientists (ardently disputed by many others, it should be noted) that other associative forms may be equally stable, or the view that such judgments vilify a group (even though one finds them in a majority of the states, but not in all states).

This Court is persuaded that Louisiana has a legitimate interest ... whether obsolete in the opinion of some, or not, in the opinion of others ... in linking children to an intact family formed by their two biological parents

As Slate points out, Feldman is the first federal judge to uphold a gay marriage ban, but other judges — such as Tennessee's Roane County Circuit Judge Russell E. Simmons Jr. — have made similar rulings. The fact that it's a federal judge reversing the trend is a big deal, though, and the New York Times suggests that the contradicting decisions at the federal level may drive the issue to the Supreme Court within a year.