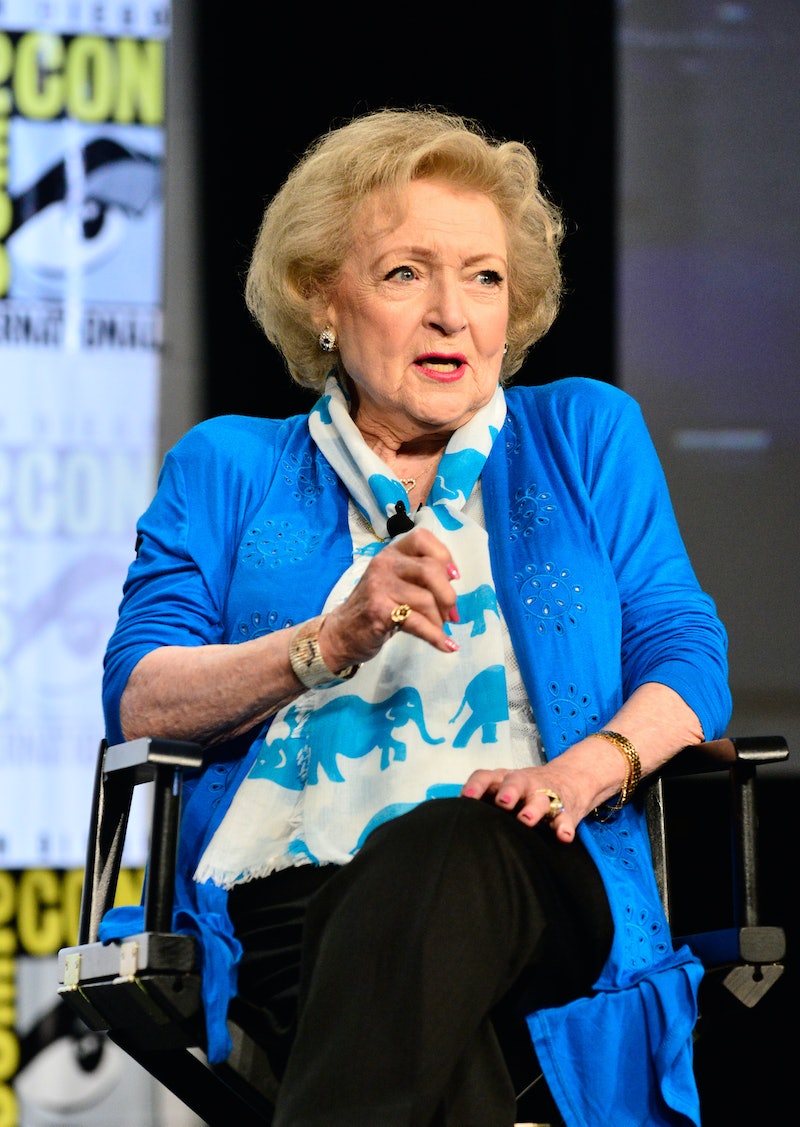 You haven't truly made it in Hollywood until you've tricked the American public into thinking you're dead, right? It seems like that's the case for most acting veterans who've gone through the death hoax song and dance over the years, and now a new member has joined the exclusive group: Betty White. A mini-heart attack rippled out across social media recently after a satirical article from Empire News sparked a flurry of rumors that Betty White had died, all thanks to the site's sneaky use of wordplay in the headline.

The article was headlined "Actress Betty White, 92, Dyes Peacefully In Her Los Angeles Home." Now if you paid any attention in school (or just have a basic grasp of the English language), you'd know that the words "dye" and "die" do not have the same meaning. Unfortunately, 99 percent of the people who stumbled across the headline were clearly not English majors, and rumors of White (not really) kicking the bucket spread like wildfire. Thankfully the 92-year-old Golden Girls actress is still alive and well, a fact confirmed by her agent Jeff Witjas who told the LA Times that "She is on the set shooting Hot in Cleveland right now." Homophones: 1, America: 0.

Who else is White joining in the Faux Great Beyond? Morgan Freeman, for starters. The actor who played God twice in Bruce Almighty and Evan Almighty has yet to actually meet the Big Guy (or Girl!), but the Internet is hell bent on pronouncing him belly up.

Freeman eventually took to his Facebook page to clear things up after yet another rumor of his death emerged in 2012.

Like Mark Twain, I keep reading that I have died. I hope those stories are not true...But if they are, I'm happy to report that my afterlife seems identical to my life when I was alive.

LOL Morgan Freeman. Such a jokester.

Along with Freeman, the Celebrity Death Hoax Hall of Fame includes Reese Witherspoon, Robert Pattinson, Bill Nye the Science Guy, and above all, Bill Cosby. Cosby has been sentenced to at least four or five fake deaths by the Internet so far. In an interview with CNN, he expressed how much the hoaxes are starting to get on his nerves.

I don't want [whoever spread the rumor] to do this anymore, because this is my fourth time being reported [dead] ... Just tell him to stop, because it isn't funny.

Ain't nobody got time for this nonsense, World Wide Web, especially not Bill Cosby!

Needless to say, the world would be a much darker place without all of these celebs, so let's hope all of these (sometimes hilarious) death rumors remain just that — rumors — for the foreseeable future.