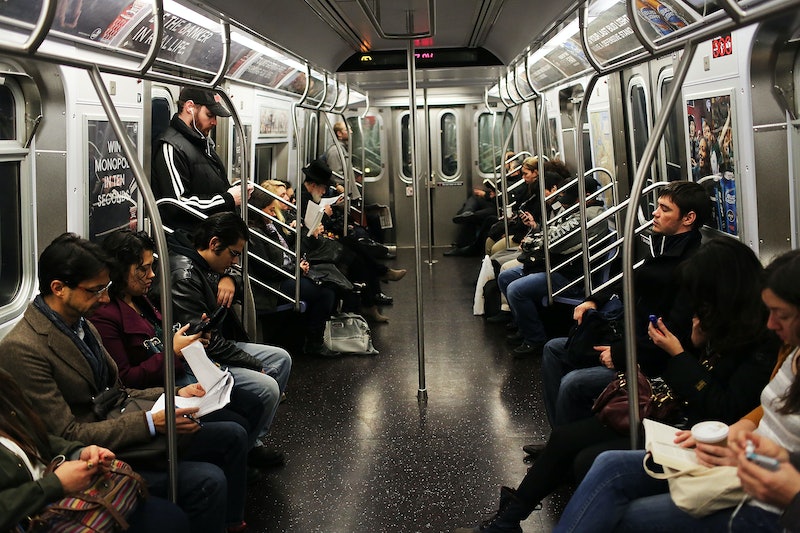 Ah, New York City — theres no place else quite like it, and a LOT of people seem to agree with that. How do I know this? Because I am a commuter in NYC, and in my travels to and from work I have seen probably every human being on the planet. The sheer volume of commuters is bad enough, but there's also just something about commuting here that brings out the worst sights (and smells) the city has to offer. Anyone who has lived here long enough to suffer through the dreaded commute knows exactly what I'm talking about, and has probably faced each of these awful phases.

1. Wow, what a beautiful day — what could possibly go wrong on the way to work?

Everything. EVERYTHING. Oh sweet innocent commuter, you live in New York City and shit is about to get as real as what you just narrowly avoided stepping on two blocks back.

2. The all important pep-talk

Psych yourself up — in times of crisis and commuting, I recommend a solid round of Beyonce singles to get yourself ready to battle it out for that sweet, sweet vacant seat.

Can someone tell me why so much of my life and money is dependent on a flimsy little square of paper? I once misplaced an entire box of tools, I cannot be asked to care for this strange flake of transportation currency. It's also worth mentioning that anyone with a monthly metro pass has their life together in ways that I will never be able to fathom.

4. You versus inexplicable underground wind

Is that a hurricane? A tornado? Nope — it's just hot garbage wind! Get ready to hold onto your hats, your sundresses, and any small pets because that musty air is coming for you no matter what you do.

No, you didn't just take a wrong turn and end up in line for Splash Mountain, you're just on your way to work. Take a good look around you, because every single person in your neighborhood is riding the subway with you this morning and they are all running 15 minutes late for a VERY important meeting.

Did you forget to grab coffee before getting to the platform? FAIL. You're going to barely have the energy to stay awake for this trip. Did you remember to get your fix before heading here? FAIL. That cup of coffee and your outfit are now in a heated battle and *spoiler alert* your outfit is going to lose. Also, if you went for the iced variety, enjoy that weird coffee sweat that's getting all over your hands right now.

7. THE FLOOD GATES HAVE OPENED

There is no greater anxiety than just before the subway pulls up to the platform. That fateful ding as the doors slide open and a herd of humans force their way onto an already packed car. Were you planning on getting off at this stop? Welp, that's not gonna happen — and how dare you for having realistic expectations during this commute! It doesn't matter if there are 17 trains directly behind this one, because every single human on the platform needs THIS train and they need it NOW.

8. Is this level of touching even legal?

If you see something say something, and if you feel something SILENTLY SCREAM something. Seriously, what is it about a morning commute that just makes everyone in NYC decide it's a great time to start spooning one another? As a human of the shorter variety I have literally lost count of the times someone has attempted to use me as a headrest.

9. When you smelt it, but someone else definitely dealt it

Monsters walk amongst us, and you won't fully understand that until someone does the unthinkable by passing gas in an enclosed space. What kind of person farts on a crowded subway train? I don't know, but they'll always decide to do it in between two stops that are too far apart.

Prepare yourself if you want, but your body will never be ready for the mass exodus that's going to happen the stop before yours. In the event that a Cloverfield-like monster decides to terrorize this subway car I will be beyond-ready thanks to every New Yorker attempting to trample me on their way to the stairs.

The one good thing about that casual evacuation that took place is *GASP* available seating! There's a slight glimmer of hope as you look around the train car and find that one empty seat to snag.

JUST KIDDING — this commute just became a scene out of Saw because there's a foreign liquid literally ALL over that seat. Sure that weird brown stuff could be some coffee but do you REALLY want to gamble on another option?

Your stop has finally arrived and all is nearly well. The swarms have tapered off and you can almost see the subway steps leading you back to the light of day. Oh happy day! It's like running into the end zone and finding a shirtless Tim Riggins waiting for you with hugs and puppies! The worst is over and you have survived...

Just kidding, because you're still trapped underground with just about every angry commuter in New York City, all of whom want to get out as badly as you do. As you try and exit, please attempt to avoid the stampede of human beings chasing you out. I think that in The Lion King, Simba held onto a tree branch or something in a similar situation — look for one of those, maybe.

Sunlight! Sky! Starbucks! You're finally back in the light of day and have gotten where you need to go. Oxygen has never felt so good, and you better make sure you breathe it in. Why you ask? Oh no reason, you'll just have to do this all over again on your way home — better make that latte a grande.

More like this
Craving The Beach? Here's Your Guide To A Solo Vacation In Turks & Caicos
By Alexis Morillo
The 5 Best Laptop Power Banks
By Vanessa Spilios
This Tarot Card Means It's Time To Reach Your Magical Potential
By Brittany Beringer
10 Ways To Be More Empathetic To Your Partner
By Raven Ishak and Lexi Inks
Get Even More From Bustle — Sign Up For The Newsletter