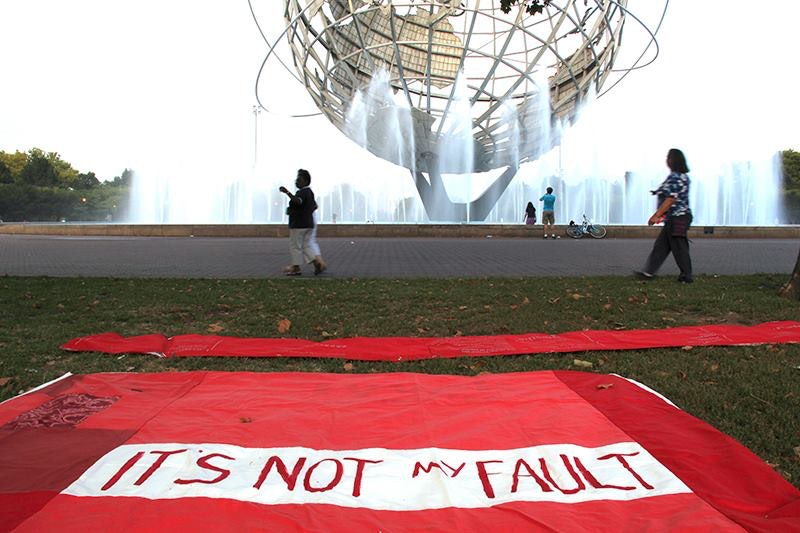 Survivors of rape are constantly spoken about in the media, but how often are their voices heard? That's the thinking behind the Monument Quilt, a new project that provides a public healing space for sexual assault survivors while also honoring their stories and lives. While traveling around the United States this summer, the Monument Quilt has shared stories from sexual assault survivors, sparking a dialog among Americans and encouraging other survivors to raise their voices.

Created by the Baltimore-based activist group FORCE: Upsetting Rape Culture, the Monument Quilt is an ongoing project that seems to grow with each tour stop. According to the group, the quilt is composed of large red squares — 4 feet by 4 feet — that each tell a story of rape or sexual assault, a statement on sexual violence, or a message of support for survivors. People are encouraged to make their own squares to donate to the project.

The ultimate goal of the Monument Quilt is to find a home on the National Mall in Washington, D.C., in 2016. By that point, FORCE hopes to stitch the quilt together so it says, "Not Alone," as it stretches across the historic mall.

The existing monuments on the national mall are places to honor the heroes of our history, to grieve the losses of violence, and to remember and reflect. When our nation remembers difficult parts of our history, we are better able to prevent injustice and atrocities from repeating. This important public process has not happened with sexual violence.

For rape and sexual assault survivors, self-care is extremely important during the recovery process. According to sexual assault organizations such as RAINN, an aspect of self-care for survivors is being able to discuss their experiences both privately and publicly. However, it's not just the act of speaking; survivors also need a community that attentively listens to their stories — not one that dismisses or questions their experiences.

By providing a public space for rape and sexual assault survivors, the Monument Quilt has not only told the stories of survivors, but has also given women and men the confidence to stand up and speak out about their own experiences. As Chicago volunteer Delphine Goree told The Gate News in August: