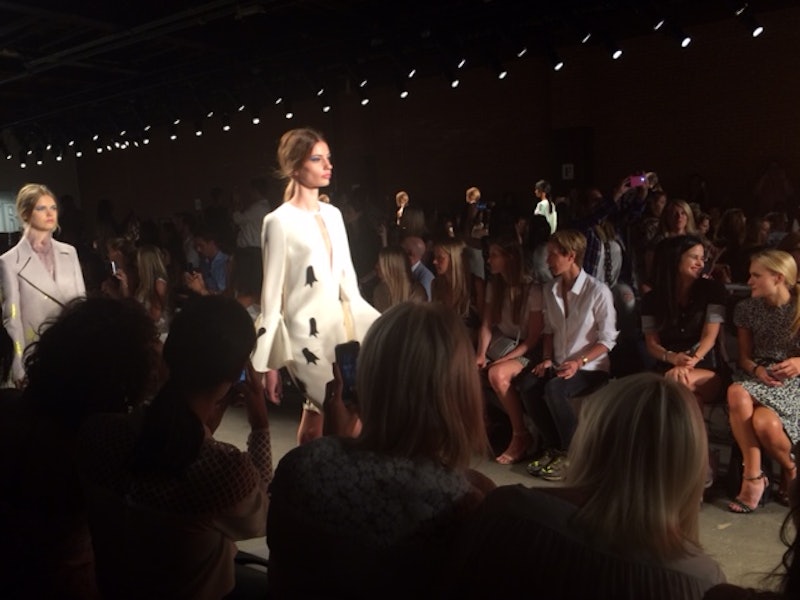 If you think cult fashion brand Honor has lost its sweet, gamine vibe just because the spring 2015 season is about pushing sartorial boundaries, you're sorely mistaken. The young, New York-based brand's designer Giovanna Randall had rebellion on the mind in designing Honor's latest collection, evidenced by the dark, hypnotic swirl of pattern which cropped up in regular intervals throughout the line's presentation and the shock of blue shadow swept across the lids of each model who sauntered down the runway.

Indeed, the hair and makeup was perhaps the most shocking element of Honor's show. Makeup artist Polly Osmond gave models exquisite skin with a mixture of Kevin Aucoin The Sensual Skin Enhancer to make sure all focus remained on those avant-garde eyes, which she expertly lined with Aucoin's The Eye Pencil Primitif in Defining Navy and Loose Shimmer Shadow in Navy. Beauty.com's James Pecis, AKA the brain behind the youthful Honor Spring 2014 coiff, described the lightly edgy look as only a New York native could, explaining,

It's an Upper East Side girl who goes down to the Bowery and falls for a bad boy.

If you're anxiously awaiting the end of this star-crossed tale, don't; chances are you already know the ending. Honor's seasonal muse finds herself heartbroken and returns to her lofty Upper East abode — with an edgier style, natch. This brooding inspiration is a far cry from the brand's Fall 2014 collection, whose collection veritably demanded that its audience embrace the season's romanticism with red satin sheaths and ethereal Cinderella gowns.

Whatever the guiding light behind Honor's latest collection, it is more saccharine than surly. A belt made to look like Necco Candy Buttons paraded by on a model in a pastel ensemble, pearl button abounded, and Honor's requisite lace and pastels made a predictable appearance in the collection. And those ubiquitous Peter Pan collars and Saint Laurent-esque black ribbons? They're here to stay if Honor has anything to say about it. While Honor's muse may have wavered in her virtuous style, the look is still one of demure innocence with a bit of cheeky fun thrown in for good measure.

Oh, and that eye shadow? Stunning.