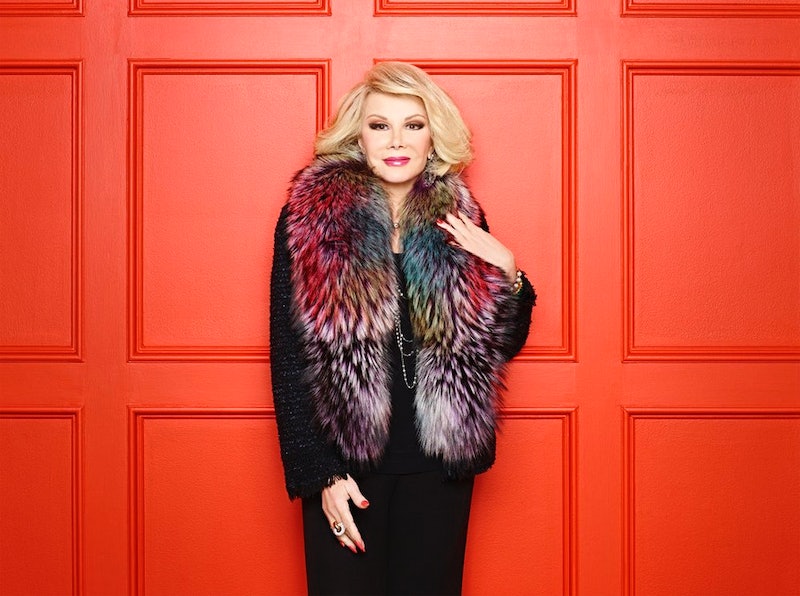 Days after being placed on life support after experiencing complications during a throat surgery, legendary comedian Joan Rivers has passed away at the age of 81. Known for her no-holds-barred brand of comedy, Rivers earned her fair share of fans and foes, which included many of the celebrities who were subjected to the comedian's scathing critiques on E!'s Fashion Police. Aside from a totally brash sense of humor, candidly speaking about cosmetic surgeries, and her countless celebrity feuds, here are a few more interesting things you may not have known about Joan Rivers.

1. Rivers was briefly married to James Sanger, heir to Bond's clothing store where she worked as a buyer.

2. Her marriage to Sanger ended after six months.

3. Despite their short-lived marriage, in 1983, Rivers said Sanger called to say he was proud of her.

4. Rivers married her second husband Edgar Rosenburg in 1965 only four days after they met. Rosenburg committed suicide in 1987.

5. Her agent Tony Rivers agent didn't like her real name Joan Alexandra Molinksy, so she took his last name and the famous moniker Joan Rivers was born.

6. Rivers graduated from Barnard with a degree in English (which would explain her way with words).

7. In 2012 she told the school's magazine, The Eye, that her favorite quote from a speech she gave at Barnard's 50th reunion was: "Remember, it’s not who you know—it’s whom."

8. She also told The Eye that she almost rented her apartment to Muammar Gaddafi, but he was killed before the transaction could take place.

9. Rivers' only sister Barbara Waxler (who passed in 2013) was an attorney and a mother of two.

10. Rivers made sure she didn't allow her work to keep her from having a one-on-one relationship with her children. In an interview with The Huffington Post, she recalled a moment on the playground involving the child of an unnamed famous actress: "The child fell and ran to the nanny. At that point I decided my child would always run to me. We had dinner together every night and every night I put a line in my book at 6 p.m. and that was it."

11. Rivers claimed she received a White House invite from every administration except that of Lyndon B. Johnson, at least as of her 1983 interview with People magazine. Rivers said,"I've been invited there by every Administration except the Johnsons because I said Lynda Bird had no style. I said, 'I took Lynda Bird into a shoe store, and she put her foot into the size measurer and said, 'I'll take it.'"

12. She was a huge fan of Vine. In her last major interview with The Daily Beast , Rivers said, "I love Vines. You make this 6.4-second drama, and you can reach 6 million viewers, and make people laugh. I find it so fabulous."

13. Rivers archived all of her jokes the old-fashioned way, by typing them up on note cards and storing them library-style in her Upper East Side apartment.