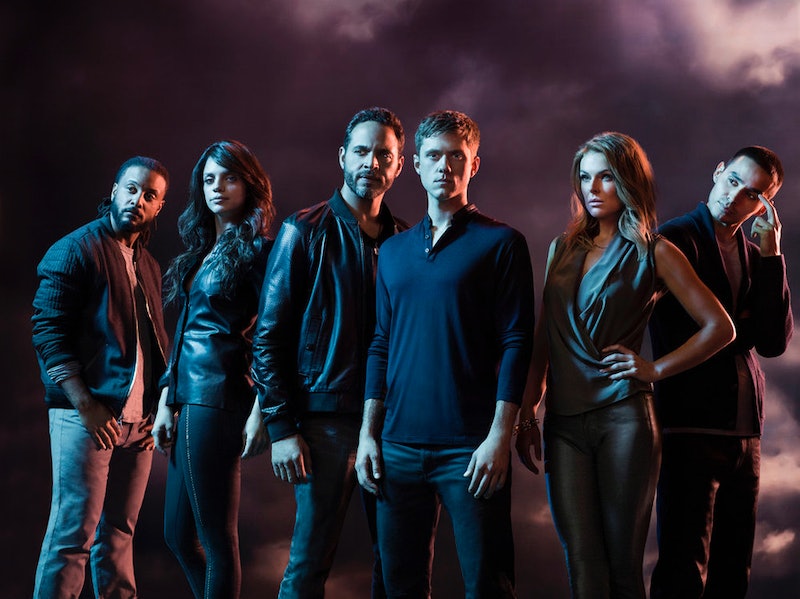 USA Network's Graceland will air its Season 2 finale on Sept. 10, and there are a lot of questions that the show still has to answer. Will Charlie tell the police that Briggs is the one who killed Juan? Will Sid finally go down as the mole? Will any of the drug traffickers actually finally go to jail instead of playing cat and mouse with the Graceland agents? Let's hope that all of this will be revealed in the Season 2 finale — because Graceland may not be renewed.

I was completely obsessed with the Jeff Eastin drama when it premiered in the summer of 2013. It was a rare serialized crime drama where you got just as much background on the characters as you did on the crimes they were solving. Mike, Briggs, Charlie, Johnny, Jakes and Paige weren't just people we would follow into their case of the week, but people who we we would follow outside of it — their relationships, struggles, and secrets informed how they handled the cases they were assigned. Graceland (the house) was a character in itself — not only did we see these FBI, DEA and Customs agents at work, but we also saw them "off the clock" with their Graceland family. And sometimes there was just as much drama within Graceland as there was outside of it.

The Season 2 finale is approaching, and so far there are no plans to renew the drama. That doesn't necessarily mean that the show won't be renewed, of course. Considering that creator Eastin has stated he already has future seasons of the show mapped out, it would be a shame for USA Network to cut his plans for the series short. (And, let's be honest, I totally want to see how the house would react to living with a Charlie/Briggs baby.) Unfortunately, the ratings may tell another story.

According to Seriable, the recent episode of Graceland "Echoes" had a viewership of 1.14 million. USA Network cancelled their series Necessary Roughness after its third season, which ended its final season with 2.36 million viewers. Low ratings are not necessarily the only reason why a network would cancel a series, but it certainly doesn't bode well for Graceland's future. New USA shows Satisfaction and Rush are pulling in similar numbers in their freshman season — USA may see them as a more viable option and put more resources towards their second season.

Of course, Graceland is more than numbers; it's a highly serialized show and the writers can mine the premise for seasons. Like any show about criminal justice, Graceland never has to worry about running out of bad guys to chase or crimes to solve. If USA Network sticks with Graceland — or more importantly, the viewers do — this show could be on for a very long time.