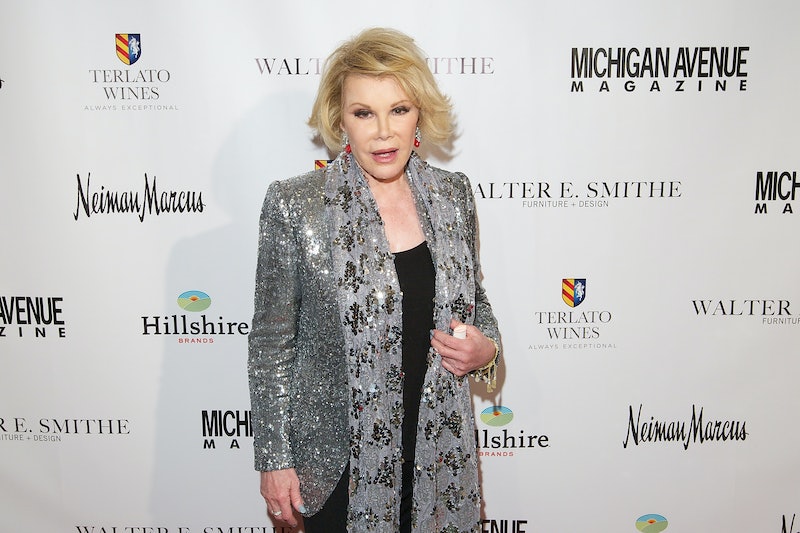 You'll see it everywhere over the next couple of days: "Joan Rivers was an icon!" "A legend!" "A groundbreaking pioneer for women in comedy!" Elsewhere, likely on twitter or your facebook feed, you're sure to see the flip side of the coin: "Joan Rivers was insensitive," "she was behind the times," "she called Michelle Obama a tranny." And that's the thing about Joan Rivers: Neither camp is necessarily wrong. In fact, I'd argue both are incredibly right. And in the wake of her recent death it's imperative that we allow the cognitive dissonance that inhabited Rivers' career, opinions, and life to remain just as intertwined and confusing as ever.

Here are a few of the facts and opinions about Rivers that I've seen referenced in the short time since her death: She was one of the first and one of the biggest female comedians in late night; she was irascibly witty; she was incredibly offensive, and not necessarily in a good way; she was a groundbreaking figure in comedy history; she fat-shamed frequently and unabashedly; The New York Times called her a "comedy stiletto."

All of these things, in my opinion, are true. Joan Rivers was a landmark figure in late night for decades — and decades before now, when late night still isn't exactly the most welcoming place for women. She also called Michelle Obama transgender (and President Obama gay for loving her) because of her wide shoulders. She utilized a trans slur while she did it.

Joan Rivers never apologized for a joke. Modern figures like Amy Schumer and Anthony Jeselnik — two comics with different shticks, but who both count butting up against public sensitivities as sport, and often art — owe a great deal to her. That's something Jeselnik referenced in a tweet after news of her death spread:

Of course, Rivers wasn't always joking. Pretty soon before her death she commented on the Israel-Gaza conflict, saying that Palestinians "deserve to be dead."

Joan Rivers was incredibly offensive, incredibly insensitive, incredibly comedically talented, and incredibly groundbreaking. One of humanity's most persistent character traits is the instinct to categorize our stories and our people into comfortable narratives: This is good, that was bad, this person lived heroically, this person deserves what they got. But rarely is a human being so simple. The time following Rivers' death will likely see the formation of two clear camps: Those who decry Rivers' actions and words, and those who will only speak of her adoringly. Because of the politics of death I imagine the latter camp will be the larger.

But ignoring or glossing over the barbs that outfitted Joan Rivers does neither her nor us any favors. She was made of those barbs, after all — they were her trademark.

In the wake of her death, as Rivers' life and career become a legacy to look back on, we have to continue to let her exist in the complicated space she occupied while she was alive. The full package shouldn't be pared down or discounted because she's no longer around to keep saying things for the world to wince or laugh at. You don't have to accept Rivers' use of trans slurs or habits of shaming people for their bodies to acknowledge that, yes, she did do things that genuinely broke ground for womankind — just like you don't have to ignore the damaging side of her legacy to respect, admire, or even adore the good. It's our duty to embrace the cognitive dissonance that someone like her leaves behind.