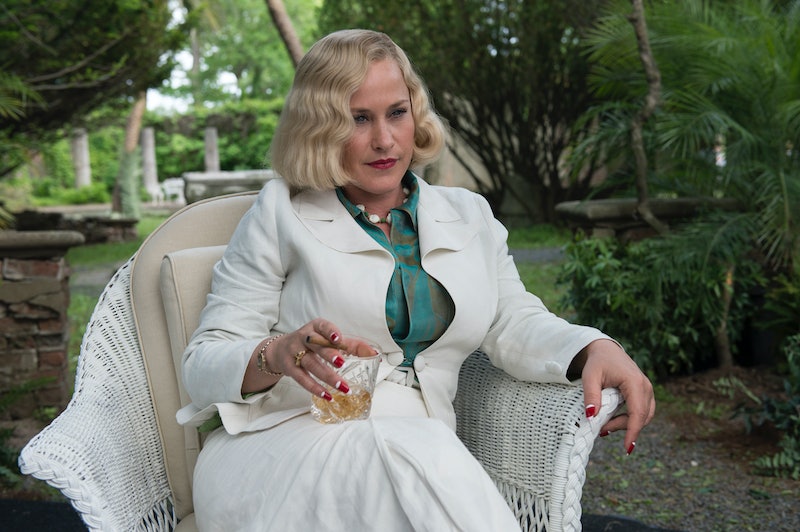 It's a good year to be Patricia Arquette. Already in 2014, she's given the performance of a lifetime in Richard Linklater's Boyhood. As the matriarch of the family depicted, she offers a vision of motherhood that's simultaneously flawed and beautiful. It wouldn't be surprising to see her walking away with a bunch of statues when it comes to awards season. That kind of meaty role would be enough for any actress in any given year. But Arquette is lucky in that she gets to play two killer characters in 2014. Arquette is also Sally Wheet in the fifth and final season of Boardwalk Empire . There, she's a savvy (if slightly criminal) businesswoman — she couldn't be more opposite from her Boyhood character.

If you don't remember, Wheet was introduced last season as a speakeasy owner in Tampa, Florida. She's hard-drinking, no-nonsense, and pretty excellent all around. Here, some more reasons why Sally Wheet is awesome, and what to expect from her this upcoming season.

Last season of Boardwalk Empire took place entirely within 1924, a few years into Prohibition. Nucky Thompson was based out of Atlantic City in New Jersey, and Wheet has set up shop in Tampa, Florida.

That’s all fine and good, but the fifth season sees a shift in both time period and venue. The series actually makes a big leap forward in time; it starts seven years after the fourth season’s end, going from 1924 to 1931. This puts it a lot closer to the end of Prohibition.

And, while Nucky will always be tied to Atlantic City, Wheet has shifted her base of operations to Cuba. Nucky does business with her down there. I don’t know about you, but I’ll take Cuba over New Jersey or Florida any day.

Say what you will about Wheet, but she's always been on more of an equal footing than Nucky's other girlfriends. For starters, she's in the same business he is — illegal hooch — and her business was just fine before he came along. That's a contrast to Nucky's other girlfriends — Lucy Danziger, Margaret Schroeder, Billie Kent — who all seemed like they needed something from Nucky. Wheet could even throw a punch like a guy (and did), This parity seems to continue in the fifth season, with Wheet and Nucky as business equals as they try to make deals with Bacardi Rum in Cuba.

And can we talk about her hair/makeup for a second? I wish I could get my hair to curl so perfectly. And Wheet can achieve this look in the Gulf humidity, with only 1920s/1930s products at her disposal. Jealous!

In real life, Arquette is not as brash as her Boardwalk Empire counterpart. "I remember when I first started, I was always terrified by the camera," she told The Independent. "I’d think: ‘Wow, all these people are quiet, and they’re staring at me, they say “action” and you’re supposed to do something’. Even on Boardwalk Empire, I caught myself doing it, and started laughing at myself because it reminded me of when I started and how I was terrified and incredibly shy.

Shy or brash, Arquette understands that things don't always end well for the main characters on Boardwalk Empire, and is cool with it, so long as Wheet get what she deserves. In an interview with Vulture, she says her character wouldn't go down without a fight.

I don't even care if I die, as long as I get a cool death. I want a cool death. I would like to be surprised. But it's weird, as an actor — if you die in a piece, how would you react to that? You know? It's kind of a weird thing that actors have to think about. But Sally seems like she would go down kicking. She can punch, she can shoot, she can hunt, so watch out!

And that, in a nutshell, is why she's the most badass chick on Boardwalk Empire.