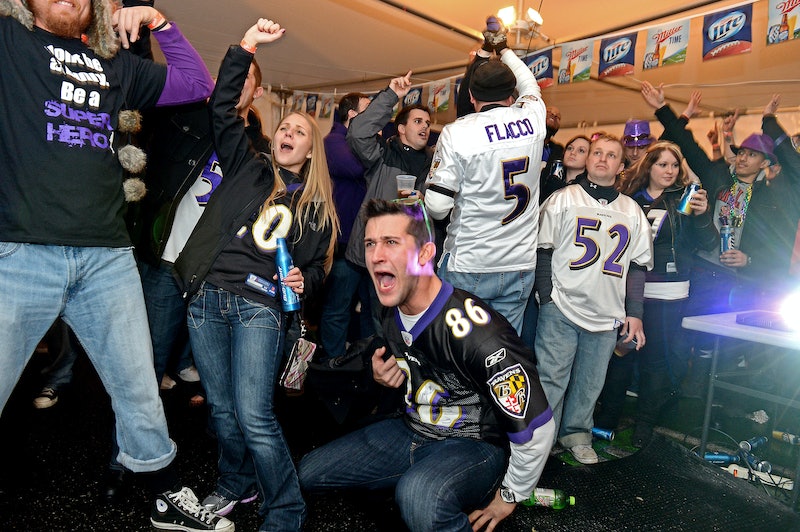 It's time to move on from summer to fall, and for those who prefer sweaters, new TV shows, and cinnamon-pumpkin-nutmeg scented everything to sweating under ceiling fans (read: me), back to school season is a reason to get excited. It's also a good time for football fans, because NBC's Sunday Night Football is back with all of the biggest match ups of the season.

OK, so try to keep this straight: Sunday Night Football airs on NBC, but actually premiered Thursday, September 4 (with the Seahawks/Packers game). Regular Sunday night games are to follow every week until the playoffs begin. But all of the rest of the games will be airing on Sunday night, or, as the song and the pre-show says, "Football Night in America," at 8:30 p.m. ET/5:30 p.m. PT.

For sports fans, this means the return of one of the most action packed American sports after a boring NBA Final and the long ramp up to MLB playoffs — the only fun event over the summer was the World Cup. And for TV fans, it means that with the one-two punch of football and The Voice, that NBC will have high enough ratings that hopefully they won't cancel any of your favorite shows.

Watching sports is one of the few events most people still try to watch live, rather than simply DVRing or grabbing it On Demand. And since we don't often whether you're a die-hard fan or just sitting next to one on the couch, here are a few things to avoid while you're watching football — especially on Sunday night.

While it's tempting to do your own play-by-play and click backwards on that DVR, don't accidentally forget to click "LIVE" once there's a commercial break. Don't want to be three minutes behind the entire game!

The East and West Coast feeds are sometimes a little laggy one way or the other. So don't be the person who writes "Can you believe XYZ?!" to your friend on the opposite coast.

Look, it's tempting to hang on to every word of the play-by-play coverage, but this is a living room, not a library.

Unless you missed something from the first half and need to catch up, there's no reason to listen to the whole halftime commentary. By the time Sunday Night Football is on, the rest of the games are already over, so you also don't need to catch up on those scores. So why not spread the TV wealth and check out the rest of Sunday night TV? You might run into Last Week Tonight, Masters of Sex, or Boardwalk Empire.