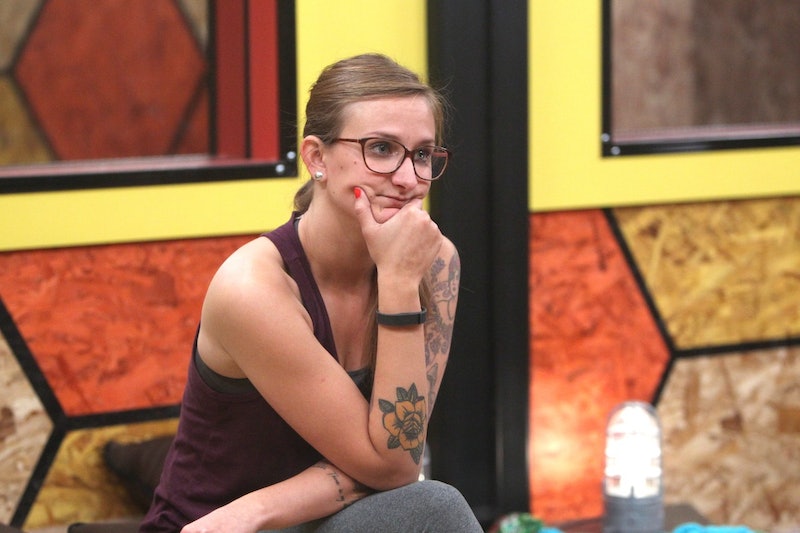 It didn't even take until the true end of the season for me to stop being a fan of Christine on Big Brother. I definitely wasn't rooting for her, not even a little bit. But even I felt awful for her during Thursday night's double eviction episode, during which Christine was not only evicted, but booed on her way out of the house. This is what happens when you put your trust in the Bombonators.

Christine, who's never without a smirk on her face, was so sure she wasn't the target of this second eviction, which I'm pretty sure all of the other houseguests saw coming. When Derrick became HoH, he even assured her that she was just a pawn. But as we all know, pawns get evicted on Big Brother all the time, and this little pawn went wee wee wee all the way home.

When host Julie Chen announced Christine's unanimous eviction (Even her boy Cody voted her out. HARSH), there was no laughter from the usually jovial Christine. Instead, she just got up, said no goodbyes, and walked straight out into the studio audience. To be betrayed like that really must've hurt. But not as much as what happened next.

As Christine walked out to greet the studio audience, who usually shower the evicted houseguest with cheers and high-fives all around, they were less than welcoming. The audience booed Christine. They actually booed her. I don't know if they genuinely hated Christine or... OK, I'm pretty certain that was it. She has made a lot of Big Brother fans angry by backstabbing Nicole and flirting with Cody, even though she's married. If Big Brother fans don't like ya, they're definitely going to let you know it.

However, a more naive, forgiving side of me wants to think that the studio audience just genuinely felt bad for her. No one likes to be lied to or feeling like a fool, so the audience could have just been booing the Bombonators for voting Christine out, a Big Brother superfan no less. Nah, they probably just hated her.

I usually don't use the word "poetic" when referring to Big Brother, but it kind of is poetic in a way that Christine and Nicole, bespectacled buddies turned four-eyed enemies, were evicted on the same night.

The saddest reality of this night, however, is that Victoria is the last remaining female contestant in the Big Brother house, and already the guys are planning to send her to Jury next week. Well, I guess we'll just have to wait until next year to hope that a woman is crowned Big Brother champion again.