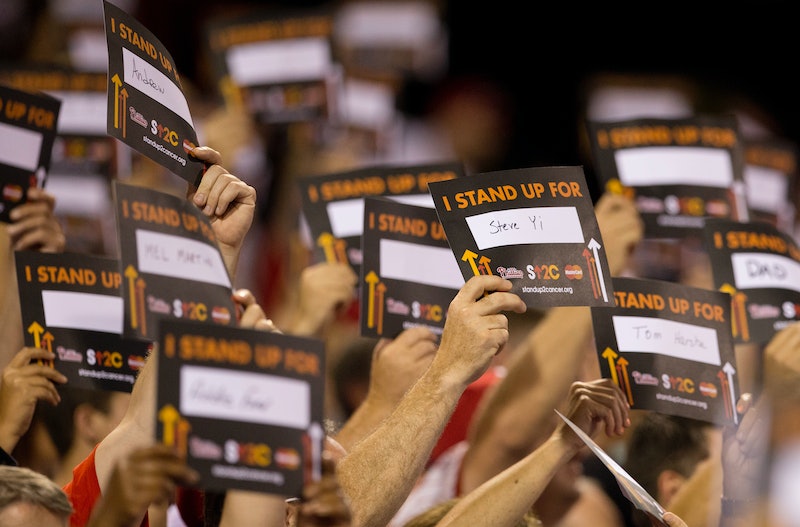 If you look at the very end of Stand Up 2 Cancer's mission statement, you’ll see the words “this is where the end of cancer begins: when we unite in one movement, unstoppable.” Unite has always been the main goal of Stand Up 2 Cancer. It brings together actors, comedians, and artists on one stage. It rallies national landmarks like Rockefeller Center and Niagara Falls to blaze yellow, orange, and red. And, in a rare moment of television, it bonds over 20 broadcast and cable networks with the same one-hour telecast.

Stand Up 2 Cancer will air on over 26 outlets — and that’s not even counting Canada — Friday night at 8 p.m. The major broadcast networks — ABC, NBC, CBS, and Fox — have donated an hour of commercial-free television to air the SU2C live telecast. They are joined by channels with niches far and wide, including HBO, Showtime, ABC Family, Bravo, TNT, VH1, Oxygen, ESPN News, and the MLB network. (Fun fact: Major League Baseball was SU2C’s founding donor.)

And, for the first time in SU2C’s history, Canada will be joining in on the fun with a corresponding telecast (featuring Canada’s own stars, eh?) that will follow SU2C’s blueprint and air on all four major English-speaking Canadian networks — CBC, City, CTV, and Global.

Can’t make it to your television? This year the show will also stream live on Yahoo and Hulu, reflecting SU2C’s initiative to reach out via social media. This is the first year the show will feature a “digital lounge” where celebrities can contact viewers by phone, Instagram, and Facebook as part of the new “We’re Calling You” campaign.

So no matter what your cable plan may be, at least for tonight, you've got plenty of opportunities to do as the organization says and Stand Up 2 Cancer.