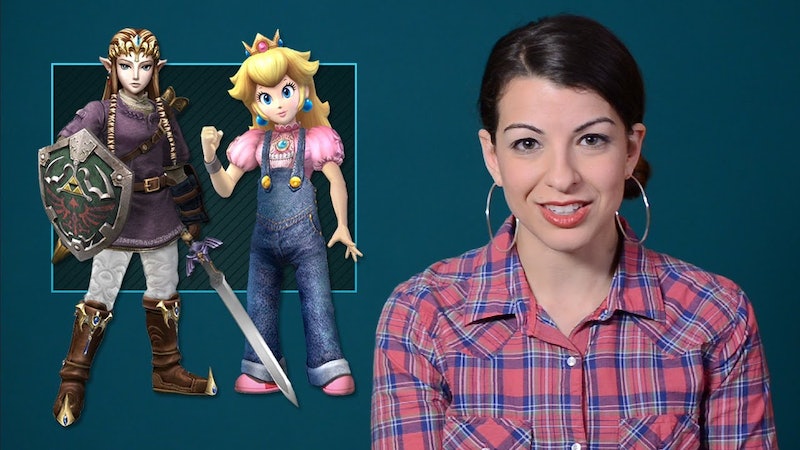 Have you noticed lately that the video gaming community is on fire? You're forgiven if not, but what's taken place lately toward a number of prominent women working in game development and criticism is extremely important, and it demands your attention. So, first things first — what is #GamerGate, and why is it spreading misogyny across social media? Its proponents and supporters claim #GamerGate is all about journalistic integrity, but a nuanced reading of the situation suggests otherwise.

In simple terms, it's best described as a long-simmering pot of male privilege, misogyny, and slut-shaming in the gamer community boiling over. Writers who've discussed this have often been criticized by gamers on social media for being duplicitous, or having unstated motives.

It helps to know the central players in this whole ordeal, which has basically fanned out to attack various female voices in games, always for a stated reason other than sexism, while the grisly truth sits barely beneath the surface. Here are the three big names you should know.

So, What Exactly Happened to Zoe Quinn?

Basically, the entire #GamerGate fiasco began when a spiteful ex-boyfriend of Zoe Quinn's posted a lengthy screed about her alleged infidelities, even posting screenshots of private text conversations he'd had with her. Ultimately, I think what he did was a gross privacy violation, so I'm not going to get into the details, with one relevant exception: He said that she'd been involved with a video game writer named Nathan Grayson.

The only reason I detail that is because it serves as the ostensible crux of the #GamerGate movement — insisting that it's all about "journalistic integrity." The idea is that Quinn's relationship with Grayson was a witting or unwitting way to get positive press for Depression Quest, a claim flatly disproven by the record — Grayson never mentioned it in writing, save for one sentence in which he called it "thoughtful."

Not exactly much of a scandal. But that was the basis of breathless, pearl-clutching attacks, this Change.org petition being a great example. And, sadly, openly misogynist and abusive ones — Quinn has received countless threats and sexist abuse, and has been conspicuously slut-shamed by a big swath of her (overwhelmingly male) critics.

Basically, Zoe Quinn is a classic case — a victim of a grossly violation breach of privacy who's now being shamed for her sexuality. Sound familiar?

How Does Anita Sarkeesian Figure Into It?

It would be wrong to make Sarkeesian out to be a novice at receiving hateful threats because of her work — the video gaming community online has more or less reviled her since the start of her Tropes vs. Women in Video Games project. First, it was mostly smearing her as a manipulative, greedy huckster because of how well-funded her Kickstarter was — or mocking the people who donated, insisting they were being scammed.

Of course, the videos she's since produced have all been trenchant, insightful, and not even that radical by the standards of some feminist pop cultural analysis — if you can't see that women are inordinately portrayed as helpless sexual objects in video games, you're not looking very hard.

But with each successive video, it's gotten worse. After her most recent offering, examining the way games sexualize even brutalized and dead women's bodies, which came out amid the crusade against Quinn, things reached scary new heights.

Sarkeesian says she's received an absolute slew of abuse over her project — getting Photoshopped emails of herself being raped by video game characters, for example — but earlier this week, she tweeted that threats forced her and her family from their home. She also tweeted out a particularly lurid example with a trigger warning, which you can see here.

The abuse of Sarkeesian is maybe the most damning example of the misogynistic overtones of #GamerGate — from the second she opened her mouth on the topic of gaming tropes, she's been a target. Again, trigger warning.

Maybe the greatest irony in all this, for the #GamerGate crowd — all that talk about Sarkeesian's donors getting ripped off has been laid to waste by the insane reaction her videos have caused. Both her work and her lived experience is a testament to how much sexism permeates games themselves, and the worst of the people who play them. After all, she starts basically every video with this disclaimer:

As always, it's important to keep in mind that it's entirely possible to be critical of some aspects of a piece of media, while still finding other parts valuable or enjoyable.

Which is absolutely true. So maybe everyone should get even a fleeting sense of perspective and calm the hell down?

And What About Jenn Frank?

Frank was a freelance writer about video games, until her op-ed went live on The Guardian: "How to Attack a Woman Who Works in Video Games." It's a good read, and Frank discusses just how targeted she's felt as a woman writing about the medium.

For example, someone recently and bafflingly tried to hack into my email and phone contacts. This is all very frightening to write, and so I must disclose that I am biased, insofar as I am terrified. I have worked in this industry for most of the last nine – not always perfect – years and I have never professed to be a perfect person. However, my values, my belief that abuse must not, cannot become “normal”, “acceptable” or “expected” is at odds with oh, God, please, why are they doing this, what’s the point, don’t let it be me, don’t let it be me.

After it was published, criticism and threats flooded her Twitter, accusing her of journalistic wrongdoing for not disclosing her support of Quinn's work, and that she'd met Anita Sarkeesian before — again, in #GamerGate world, opinions of women tend to all be parts of calculated, grand-scale manipulations for personal profit.

On top of that, Frank did disclose these things, but The Guardian cut it from the article, considering the disclosures not serious. They've since added a note confirming this.

That hasn't stopped the stream of abuse via social media, however, and Frank decided she'd had enough. Clearly riled by the feeling that the community she once found unity in had turned on her, she announced she's leaving her old job behind.

Basically, #GamerGate flooded Frank with inane, wild-eyed criticisms and conspiracy theories until she couldn't take anymore. While she may have been considering a career change for a while prior, as she alluded to above, it's clear that this latest deluge was the final straw.

It isn't about journalistic integrity, not really. This is just good old fashioned misogynistic bile, any way you slice it. And as somebody who used to play a whole lot of video games, and now play regularly, I wish I didn't now feel so filthy by association.