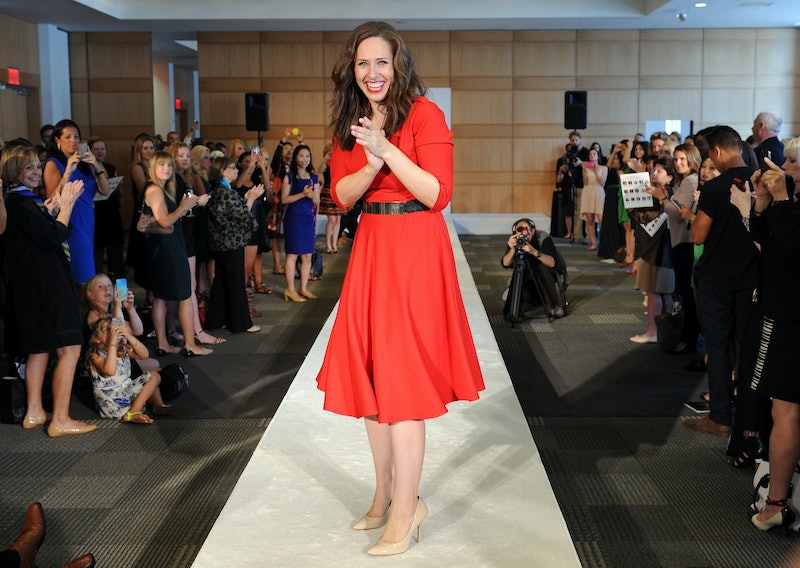 Since the runway debut of her collection last winter, Carrie Hammer's company has grown markedly in both style and consumer adoration. Whereas Hammer's first presentation took place amongst close friends and colleagues in a small, streamlined space off Union Square, the designer's latest collection was an official addition to the New York Fashion Week calendar — and took place at Fordham Law School's Fashion Law Institute, to boot. If the crowd of eager audience member and admirers at Hammer's Friday morning show was any indication, the designer has struck gold with a typically ill-served niche amongst female consumers: women who want chic, office-appropriate clothing that isn't fabricated to fit a supermodel's body type — or budget.

Following the precedent she set with her first runway show, Hammer included a number of accomplished "role models" on her runway, from Save The Date event planning company Jennifer Gilbert to bacterial meningitis survivor Karen Crespo, who debuted her new prosthetics on the runway to reverberant applause. Crespo, who with the help of Hammer now has a pair of custom-made prosthetic arms from Hanger, Inc., strode confidently down the catwalk in a vibrant crimson dress complemented by flowing curls and a sultry smokey eye. It is rare to see such a lively group of models on a Fashion Week runway. The confident smiles of Hammer's role models breathed life into the show, drawing the audience into the show as opposed to keeping them at arm's length with the cold, stoic expressions often see at couture events. Needless to say, it's refreshing to know that excitement and exuberance is encouraged when wearing Carrie's clothing.

Indeed, the line itself was cause for celebration. Trench coats were a significant source of inspiration for the collection, appearing in the form of pastel lace outerwear, traditional khaki coats, and several coat dresses that recalled traditional Burberry creations of the same name. Also present were Hammer's signature sheath dresses, some created in rich, decadent grey, others in bold red and emerald green. As one of the founding principles behind Hammer's line is creating a fit for every body type, each piece was tailored to a T for the woman parading it down the runway, promising that shapeless, mass-produced workwear is a thing of the past. As further proof of her commitment to encouraging a positive body image amongst her female fans, Hammer enlisted a number of waiters to pass out dainty and decadent treats from Dominique Ansel's renowned bakery after the presentation wrapped. Cronuts and couture? It simply doesn't get much better than that.

More like this
Here Are All 703 Outfits Rachel Wore On Friends
By Kat George
The Best Heels For Bunions, According To A Podiatrist
By Margeaux Baulch Klein and Maria Cassano
Dua Lipa On YSL Beauty, Plus Her Fearless Approach To Hair & Makeup
By Erin Stovall
Florence Pugh’s Bra Top & Fringe Skirt Are Giving High Fashion Goth
By Dominique Norman
Get Even More From Bustle — Sign Up For The Newsletter