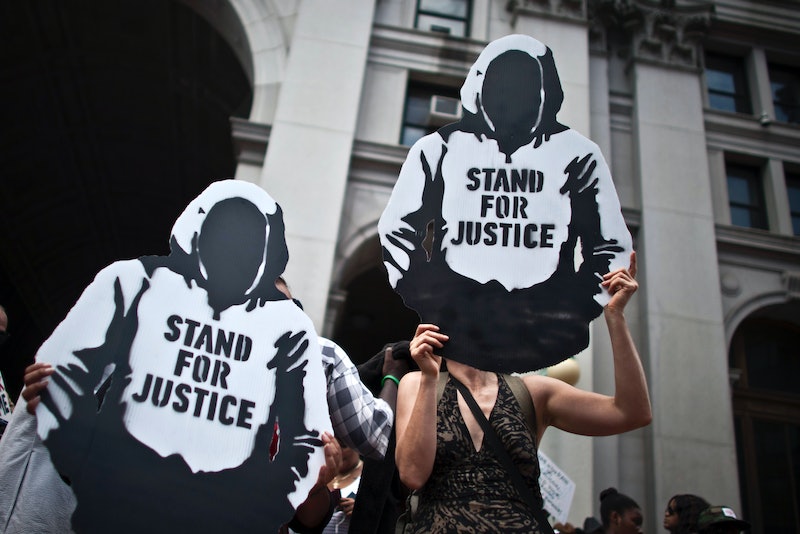 The Coalition to Stop Gun Violence (CSGV) released a new PSA Monday that is bound to stir up some controversy. The one and a half minute video portrays an eerie reenactment of the death of Trayvon Martin, the 17-year-old African American teenager who was of course shot and killed by George Zimmerman on the night of February 26, 2012. Zimmerman was found 'not guilty' thanks to Florida's Stand Your Ground law, which forgives the use of deadly force rather than retreat in the face of perceived danger.

First, we hear the voice of George Zimmerman himself, as he is told by a dispatcher to stop following Trayvon Martin. Then, the video cuts to a neighbor watching the scene out her window and describing it to a female dispatcher. She hears the gunshot and begins to cry.

At the end of the PSA, the camera pans across dozens of dead male bodies, meant to represent the many victims of such crimes in the 26 states where Stand Your Ground laws persist.

Now you can provoke a fight, and if losing that fight, kill the person you attacked." They ask viewers to take action against these laws by signing a petition directed at state legislators, with the message: "Oppose this immoral legislation."

Ladd Everitt, a press contact for the organization, told Bustle that the CSGV has already received "a strong and positive reaction" to the video and is considering raising funds to release the ad (which is currently online-only) in certain television markets.

Everitt also added that Trayvon Martin's parents were not consulted in the making of the video. According to the family's attorney, Martin's mother cannot bring herself to watch the video, but is also not calling for it to be taken down. Watch for yourself: