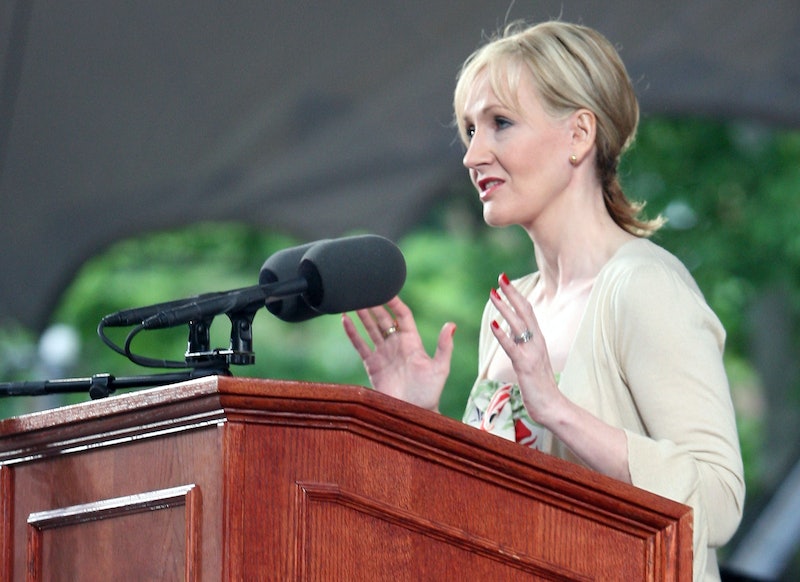 It's been almost seven years since J.K. Rowling stood in front of a crowd at Carnegie Hall and took a question from a 19-year-old in the audience. "Did Dumbledore, who believed in the prevailing power of love, ever fall in love himself?" The answer, historically, is yes: "My truthful answer to you...I always thought of Dumbledore as gay," started Rowling's response, going on to outline the headmaster's relationship with the Dark Wizard Grindelwald. To no one's surprise but to a collective exasperated sigh, Rowling is still having to deal with — well, with people who just can't deal.

"Once u revealed Dumbledore was homosexual I stopped being a fan. Nice how u blindsided us with that one. Enjoy your billion $ [sic]," twitter user @halfelven55ff wrote to Rowling Saturday. The user's twitter page has been deactivated at this point, probably because provoking a fandom that prides itself on tolerance is an A+ way to get a bunch of people to yell at you on social media.

Albus Dumbledore's homosexuality is hardly the be-all end-all of LGBT representation, considering his gayness is hardly written as more than subtext in the books themselves. But it's certainly meant a lot to a lot of people regardless, and Rowling shut down that little homophobic burst right quick:

For those not caught up with their wealthy Scottish businessmen, Brian Souter is a man who's supported a proposition which proposed the banning of the promotion of homosexuality in schools.*

Rowling's been upping her twitter participation of late, so she had a couple follow-up tweets about the encounter, though they seemed more aimed at her larger fanbase/twitter in general than at the one misguided soul:

*Edit: This post used to claim that the Scottish Nationalist Party was vocally opposed to same sex marriage. The majority of SNP voted to legalize same sex marriage in Scotland so we decided to take that part out. Brian Souter's still noted (at least by Rowling) as an anti-gay public person.