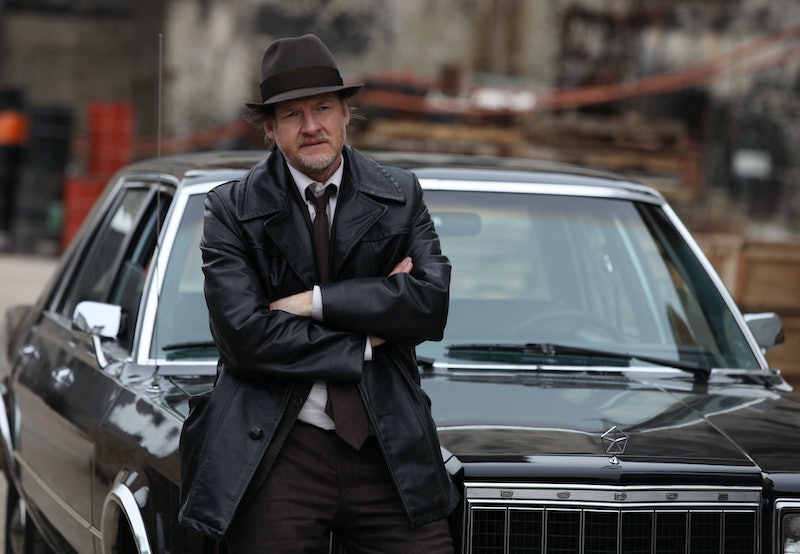 It's hard to keep up with the cast of characters in the Batman universe. The characters have been around for decades and with each new comic, TV show, and movie's take on the material, there are ever-so-slight changes in persona. So, what are we supposed to make of Gotham 's Harvey Bullock, a detective on the Gotham police force? Is he someone we're supposed to trust?The answer is: mostly. Bullock has been a character in the Batman universe since 1974, and, maybe in the beginning, he wasn't so trustworthy. But since the '80s and the "Crisis on Infinite Earths" storyline, Bullock has been an honest cop — although you'd never know it from his slovenly appearance, gruff demeanor, and bad reputation. On Gotham, Donal Logue is stepping into the role of Bullock, and he's a perfect choice. Why? Because of Terriers, one of the best detective shows of all time (albeit one that had low ratings and was canceled too quickly). Terriers is definitely a streaming must-watch if you haven't seen it already. In it, Logue plays — fittingly

— a gone-to-seed private detective who had been kicked off the local police force. It was a fun show.

It's a sunny California noir like our beloved Veronica Mars, so like Bullock, Logue's character has to investigate the ultra-wealthy. Investigating the murder of Bruce Wayne's parents shouldn't be too difficult for Logue. Of course, Logue or no Logue, Gotham is not the first show to put Bullock on screen. For those of you paying attention in the '90s, he was a big part of Batman: The Animated Series and The New Batman Adventures. Those shows stuck to the post-'80s model of Bullock, where he's rough around the edges, but not corrupt.His voice was provided by actor Robert Costanzo (whose face you can see in Judy Moody and the Not Bummer Summer

Tim Burton also used a Bullock type in his 1989 Batman, although he gave the character a different name: Eckhardt. (Not to be confused with Aaron Eckhart, who plays a different Harvey — Harvey Dent, who becomes Two-Face — in The Dark Knight. I told you it wasn't easy keeping this all straight.) This time he's played by William Hootkins. Eckhardt has a run-in with Jack Napier before he becomes The Joker. It doesn't end well.

For super-nerds, Hootkins also has a small part in Star Wars: A New Hope. He plays a pilot with the unfortunate name of Porkins. I don't want to spoil anything, but that also doesn't end well.

And finally in Christopher Nolan's Batman Begins, there was another Bullock-type cop. Again, he wasn't exactly Harvey Bullock; his name was Arnold Flass. Unlike Bullock, Flass was pretty corrupt, and worked for mob boss Carmine Falcone. He was played by Mark Boone Junior, who, to bring things full circle, played Bobby Munson on Sons of Anarchy, a show that also features Donal Logue.

So, Logue has a rogues' gallery of prior Harvey Bullocks to live up to. The good news is he still doesn't have a very high bar to clear, and could go down as the best Bullock in Batman history.