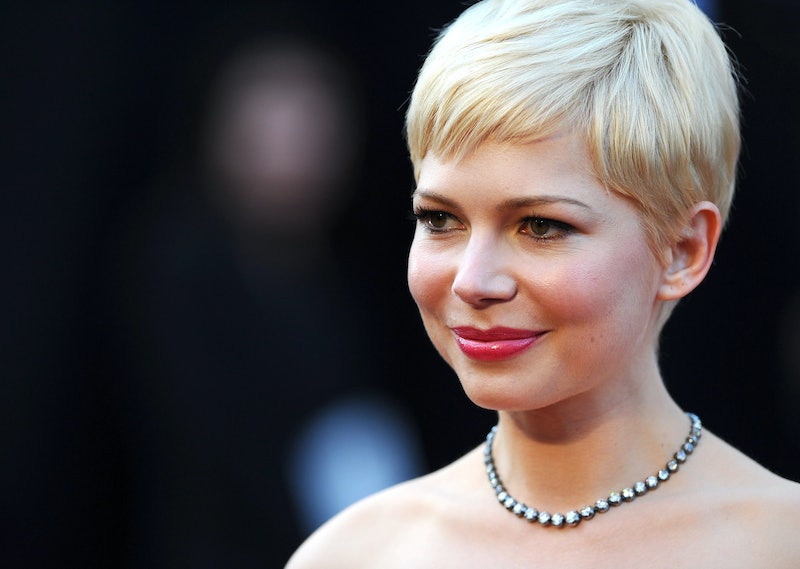 I have to admit, I've missed out on much of Michelle Williams oeuvre: I was about a half generation too late to watch Dawson's Creek, and am probably one of the few people on this planet who hasn't yet seen Brokeback Mountain (I want to! I love Ang Lee and all other parties involved!).

Now that I think about it, the only movie of hers I've ever actually seen all the way through was Take This Waltz, which was a charming relationship drama written/directed by Sarah Polley — and if you like clothes (who am I kidding, if you're reading this post in the first place, of course you like clothes) you should check it out, because Williams' style in that film is pure, distilled retro adorable.

Anyway, off that tangent — whether I've seen her films or not, I've been a lifelong fan of Williams' mod-vintage-cutesy aesthetic: no matter if it comes in the form of intricate beading, well-placed (and well-tied) bows, or a waist-cinching belt, she always has a style story — and she sticks to it. Plus, her signature pixie punches things up a notch, always injecting each of her looks with a Vidal Sasoon x Mia Farrow-esque flair. As Tuesday is her 34th birthday, let's do a little countdown of her best looks over her career:

The shoulder bows elevate this look from standard LBD to something a little special.

This Miu Miu frock (worn during the My Week With Marilyn press tour) is so unabashedly girly that I can't help but love it.

Similarly to her My Week With Marilyn press tour, her Oz The Great and Powerful press tour was filled to bursting with ah-mazing looks, and this blue-green textured strapless gown was one of my favorites.

Williams is always one to watch at the Academy Awards — in 2011, she totally delivered in this body-skimming, luxuriously-beaded Chanel column gown.

The little rain clouds are actually raining silver sequins — does it get any better than that? Also, the swingy '60s shift? Very Rosemary's Baby-approved — in a good way.

Another Oscars look! A couple of years back, she looked absolutely lovely in this orange/red vintage-esque peplum'd gown (which reportedly took over 300 hours to construct). And isn't the little bow on the hip adorable?

It's just so pretty and delicate; it puts the "pixie" in "pixie cut."

Her contouring is a little intense (like, Kontouring level), but I absolutely love this dress. Only someone as winsomely adorable-yet-poised as Williams could pull off a dress with large gold bird appliqués on it — plus, it was one of the best dresses at the Met Gala that year, IMHO.

Okay, y'all knew this was coming right? The best employment of marigold at the Oscars that there ever was — and ever will be. This absolutely gorgeous gown has topped "best dressed" lists annually since the 2006 Academy Awards, and I think it will go down in history along with fashion favorites such as Audrey Hepburn's infamous 1954 Givenchy number or Grace Kelly's ice blue showstopper from 1955.