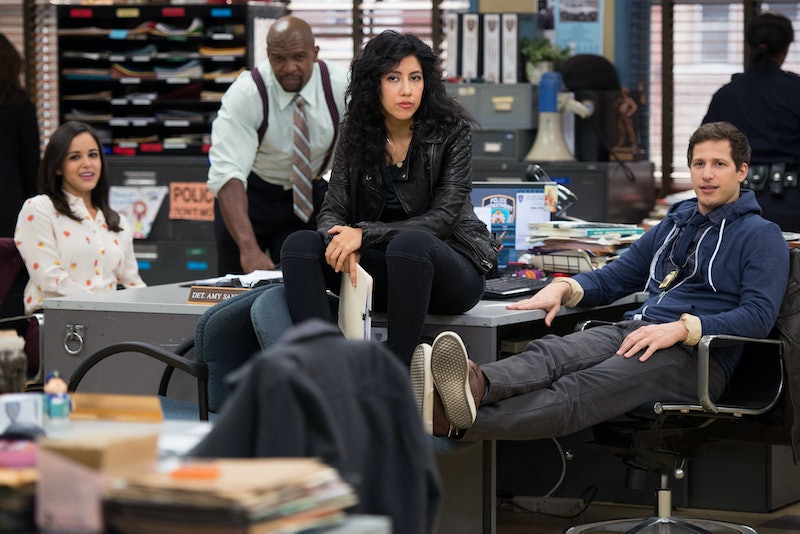 These are three of the best and most beloved workplace comedies to hit our TV screens in recent years. Unfortunately, The Office and 30 Rock are already off the air, while

the upcoming season of Parks and Rec will also be its last. It's slim-pickings in the workplace comedy world, so what's a sitcom-loving viewer like yourself supposed to do? Actually find comedy in your own job? Nah, you don't need to do that when we have Brooklyn Nine-Nine returning for its second season.

Yes, Brooklyn Nine-Nine, FOX's slapstick cop show, is the most promising sitcom today to live up to the success of those iconic sitcoms. You've got a flawed yet lovable ensemble cast of characters, an occupation made for exciting storylines, and a stern but secretly sweet mentor figure in Captain Ray Holt, delightfully played by Andre Braugher in an Emmy-nominated performance. Put all of those ingredients in your workplace sitcom stew, and let the smell of comedy goodness waft over you. Go ahead. Take it all in.

But if you didn't see the inaugural season of Brooklyn Nine-Nine, you don't have any clue as to what I'm talking about, do you? I get it. Fall is a confusing time for all of us. With so many new shows premiering at once, this one might have slipped through the cracks last year. It's OK. You've got plenty of time to binge-watch the entire first season so you're all ready to report for duty come Sunday, Sept. 28 when the new season premieres.

Since Brooklyn Nine-Nine is a show about an NYPD precinct and all, you probably should find a legal way to watch the first season. It just wouldn't feel right otherwise. So do your civic duty and try one of these methods to catch up before Season 2 starts.

FOX On Demand or Online

FOX still has its Fall Binge promotion going on, where you can catch up on your favorite shows from the network before their respective seasons begin this month and next. However, with only five episodes currently available to view On Demand through most cable providers and on FOX.com, it isn't so much a binge as a meal where you ate a little bit more than usual.

If you truly want to watch the whole season of Brooklyn Nine-Nine, you've got to pay for it. You can buy the full seasons, or individual episodes if you only missed a select few, on iTunes and Amazon Instant Video. However, Hulu might be your best bet. While you can only get those same five episodes that are available On Demand and on FOX.com for free, you can catch the whole series by connecting a participating cable provider to your account or with a Hulu Plus subscription. In case you don't already shell out the $7.99 per month, you can sign up right now and get one week for free. Since there are only 22 episodes, and each one is only about 22 minutes long, you can certainly power through the whole season in a weekend. They don't call it binge-watching for nothing.

So it would be a bummer to miss out on the stellar first season of this show. It truly would. But Brooklyn Nine-Nine isn't Breaking Bad or anything like that, so if you just started with the Season 2 premiere, I'm sure you'd be able to catch on to what has happened on the show pretty quickly. And if there's anything that doesn't make sense, use your sleuthing skills and just Google it.