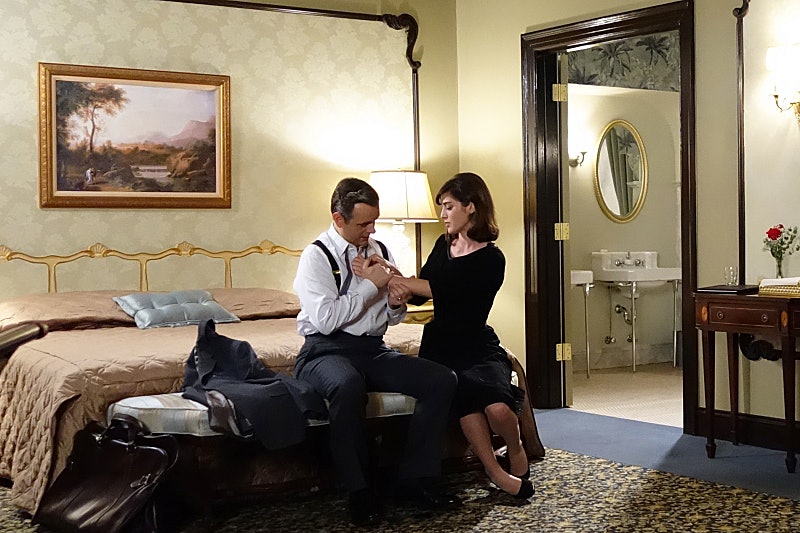 On this week's episode of Masters of Sex our favorite characters are still secretive, and their secrets are only getting harder to keep. But this week the focus wasn't on hiding but on healing. From Bill to Virginia to Lester the lovable cameraman, everyone is trying to heal themselves or the people around them, one way or another. Even Libby is trying to repair damage and be some small part of making things better by getting more involved with the Congress of Racial Equality. But as this episode shows, healing is not as easy as it seems.

Now that Bill and Virginia have decided to try treating sexual dysfunctions instead of only focusing on "typical" participants, they are having to go through a lot of trial and error, given that no doctor has ever tried treating these things before. In their quest to cure erectile dysfunction, they send Lester off to be their "inside man" in a session with a prostitute to help him get it up. Of course, secretly Bill just wants to know the secret to curing this problem so he'll never have to admit that he has it. This, naturally, doesn't work out, and Lester's session doesn't end in success.

More seriously, Masters and Johnson continues trying to help Barbara, the woman with vaginismus who has only recently remembered a sexual relationship she had with her brother as a child. It's very clear that she is desperately in need of help — including the help of a psychologist whom she still refuses to go see — but so far Bill and Virginia don't seem to be accomplishing much on that front.

Of course, all of this treatment has the two butting heads once again about whether or not they should be focusing purely on the physiological, like Bill wants, or if they should include psychological factors in their analysis, like Virginia wants. In some ways, it's a question of what healing itself looks like. And Bill, naturally, wants nothing to do with self-examination and the painful things it might dredge up — as we see in his interactions with his brother.

This week Frank misleads Bill into going with him to one of Frank's AA meetings where he gets a new chip and gets to tell a story. As Frank talks about his and Bill's father and gives us all some more insight into what it was like growing up in their family, Bill gets up and walks out of the room. Later he and Frank have an emotional conversation — Bill's absolute least favorite thing in the world it seems — which doesn't bring either any closure but maybe will lead to more communication and bring the brothers one step closer to repairing their relationship. As Frank tries to tell Bill, the truth really can heal people.

And it seems that that isn't just true of people struggling with addiction. I don't know if Bill took what Frank said to heart or if he just got tired of lying to Virginia — after all, as she points out, their affair stopped being about the study years ago. And even though the rest of us knew that from the beginning, it seems the two of them might have finally figured it out, too, because Bill finally admits to Virginia that he has erectile dysfunction.

You know what they say about admitting you have a problem. So let the sexual healing begin.