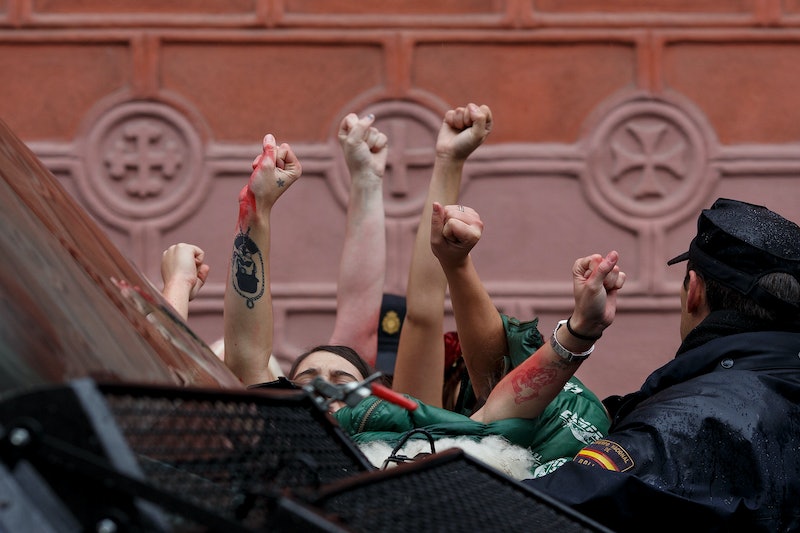 If all goes according to Republican plan, Missouri will adopt one of the most restrictive abortion policies in the country, HB 1307, tripling the mandatory waiting time to get an abortion. So, why would a woman need to wait 72 hours before undergoing a routine and consistently safe medical procedure? Short answer: it's nothing more than another pro-life tactic designed to squash already dwindling abortion access.

In May, the Missouri legislature passed HB 1307 amid the fury of anyone with a conscience. Under the law, women seeking abortions would have to travel to St. Louis for an appointment at the only clinic in the state, then wait 72 hours before actually undergoing the procedure. Democratic Governor Jay Nixon vetoed the bill in July, citing a lack of exceptions for rape and incest.

But that wouldn't stop the avid group of pro-lifers at the Missouri statehouse. The legislature will begin its annual veto session on Wednesday, and it looks like Nixon's nix of the 72-hour bill will be overturned by the Republican-led House and Senate.

If successful, Missouri will become the third state in the U.S. to have a 72-hour ban, joining Utah and South Dakota. With little precedent for the longest waiting period in the country, it seemed unclear why lawmakers wanted to make the jump. Is 72 hours some sort of magic number?

As I reported for The Columbia Missourian, there is very little research for legislatures to build this timeframe around. The Bixby Center for Global Reproductive Health is currently doing the only research on 72-hour waiting periods, focusing their study on Utah clinics. The research is still ongoing, and the center has found no concrete evidence of how these extended periods affect women's health.

At this point, you begin to suspect that no one sponsoring these bills has any clue what they're talking about, for all of the "let's protect women's health" rhetoric that gets thrown around in pro-choice arguments. Then, the House bill sponsor Kevin Elmer told me this as I reported for The Columbia Missourian:

I thought it was something that looked from the legal perspective like it’s going to meet constitutional muster and looks like an incremental step toward protecting life. Seventy-two hours is what I latched onto because I’d seen the other states do that, and other than that, I can’t say there is a particular reason why it’s three days versus two days.

Think about that. The new obstacle in place is, as admitted by the bill's own sponsor, arbitrary.

The truth is, it isn't arbitrary in the minds of the lawmakers. There is a reason for a 72-hour wait, but in polite conversation they won't always say it. Republicans want to edge out abortion as much as they can in the state of Missouri, putting as many hurdles on the path to St. Louis as possible. This past legislative session there was a whopping 32 anti-abortion bills filed, with this one coming to the forefront of Republican efforts to push through. Please make no mistake, this bill is designed as a potentially insurmountable obstacle for women seeking abortions in Missouri.

For women in school or working, traveling sometimes hundreds of miles twice in three days isn't feasible. Much less getting there and waiting out the 72 hours. HB 1307 is rooted in nothing more than a party trying to restrict women's governance over their own bodies.