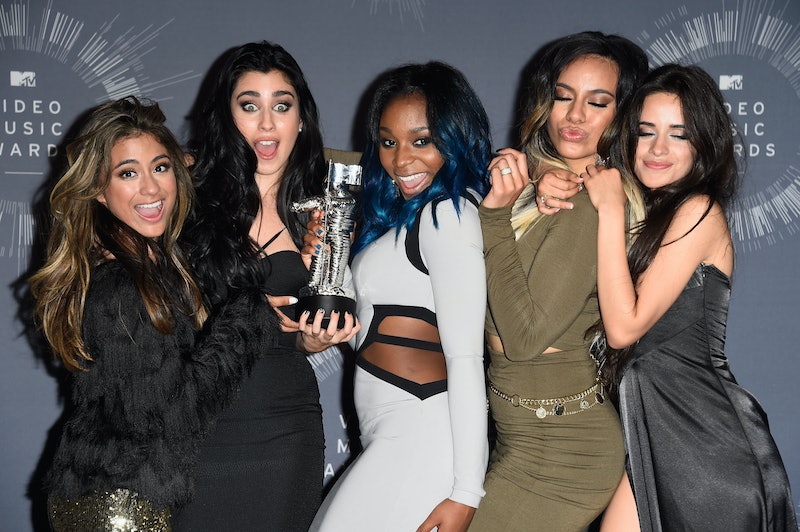 On Monday, Twitter was a regular roller coaster of emotions. If you’re weren't awing and cooing at the anticipation of Will and Kate’s second royal baby, then you were likely super cheesed off at the announcement that two of Simon Cowell's bands having the same album release date. Yeah, not only did One Direction take away Kate Middleton’s thunder by announcing their anticipated fourth album — helpfully entitled Four, lest you forget — but they also stole Fifth Harmony’s hype. Or at least sales. It's as bad as wearing the same dress on the red carpet, because we're obviously going to unfairly compare. Someone has some 'splaining to do and I'm thinking it's the people who manage these bands. Ever since fans realized that One Direction and Fifth Harmony are going to drop their albums on the same day, they began taking to Twitter to voice their concerns. One user went so far as to say that Fifth Harmony’s music career was over before it could even begin, but that’s a bit bleak. Sure, it seems unfair for a younger band’s debut album to drop the same day (Nov. 17, for the record) as an international veteran boy band... Actually, yeah, I can see why someone would Tweet this:

The bands have been pitted against each other before. For those '90s nostalgia fans out there, 1D and 5H have the makings of being the modern day N'SYNC versus Backstreet Boys "feud," except without TRL. Fifth Harmony's even been called the female One Direction because they seriously have a ton of things in common. Check out the ladies doing their best 1D impression:

It's uncanny isn't it? While the fan might've purposefully asked 5H to pose similarly, but there's no denying that both bands are eerily alike sometimes.

They Have Shortened Band Nicknames

Fifth Harmony is 5H. One Direction is 1D. They're similarly succinct, which saves space on tweets, of course.

They Were Discovered the Same Way

Both groups were made up by a rag-tag bunch of X Factor contestants. Each member of these groups might've auditioned alone, but they made it further together. Sort of like a sports team.

They Had the Same Mentor

Simon Cowell has apparently patented the formula for successful pop singing groups. After working his magic on One Direction in England, Cowell took his X Factor coaching chops to the American X Factor series and created 5H.

They Both Finished Third

What are the odds of that happening? Neither Fifth Harmony nor One Direction won their respective singing talent programs, but they finished in the same place.

Half of me is starting to think that this is all a clever rouse devised by Simon Cowell where he's been delivering us a subliminal message by patterning 5H after 1D so we trust them. Hmm... In that case, it makes sense that these two bands would share an album release date, but it seems unfair to 5H to take away their thunder like this. Fans especially aren't happy:

I'm with them. I'd love to see an all girl group — which we have been lacking lately — do their own thing and have their own chance. Of course, comparisons of their albums' success will come up, but regardless of who comes out on top, their combined sales will crash iTunes for sure.