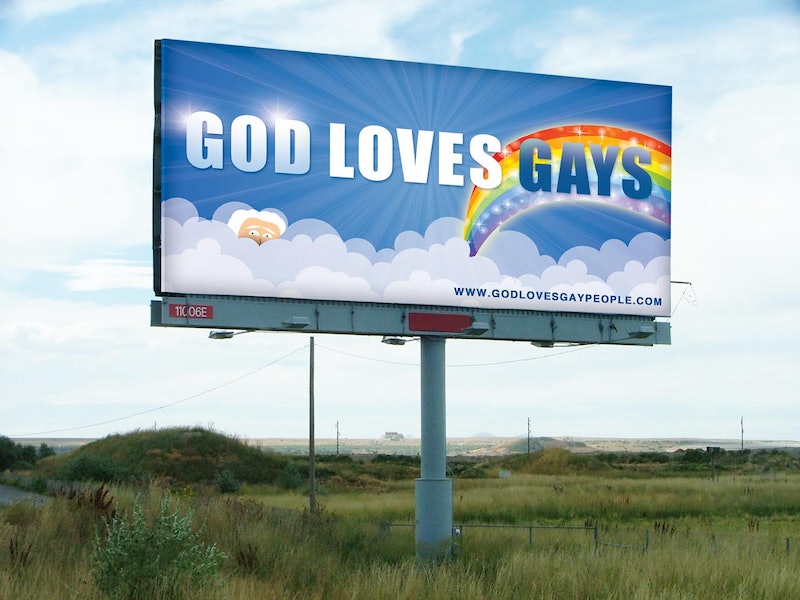 The existence of God is one of life's big questions, but it looks like we don't have to do too much searching anymore: God is on Facebook, and he loves the LGBT community. At least, that's what his new billboard tells us. After raising thousands of dollars through his God Loves Gays campaign, "God" has erected a billboard in Topeka, Kansas to show how much he truly cares — and stick it to the Westboro Baptist Church.

Although God has existed before the dawn of the Earth, the Facebook page God, which now has nearly two million followers, only began in 2011. If you're wondering, God also runs YouTube and Twitter pages, and his favorite activities are "creating, smiting, lifting weights [and] bubble baths."

God clearly came with a mission when he joined Facebook: challenge the Westboro Baptist Church and other Christian groups who routinely disparage members of the LGBTQ community. As God explains on his website, God Loves Gay People:

This evil lie has been put into the world by bigots like them for thousands of years. The time has come to right this wrong.

BEHOLD! God is tired of having hate-speech put into his mouth by bigots.

In order to fulfill his mission, God decided in August to take his ministry from Facebook to the streets of Topeka, Kansas — the home base of the Westboro Baptist Church — to erect a billboard in the same vein as the church's infamous "God Hates Fags" signs. But instead, this billboard would be full of love, acceptance and rainbows.

After raising $50,000 for his God Loves Gays Billboard Project through IndieGogo, the Almighty Father has finally established the colorful "God Loves Gays" billboard in Topeka. At the time of this writing, the IndieGogo campaign is still going, with nearly $80,000 contributions. God says he'll use the extra funds to purchase bus ads in Topeka and donate to the the National Alliance to End Homelessness. If he reaches $100,000, he'll erect another billboard in Provo, Utah. (You can donate here.)

Of course, the "God Loves Gays" billboard is already sparking controversy in Topeka. A spokesperson for the Westboro Baptist Church told Mashable:

Thank God for that lying billboard! Every soul that sees it will either rejoice for the lie and the vain hope of afflicting the servants of God at WBC. Or, they will sigh and mourn for that awful sin and all the parts of it, knowing that every single soul that weighed in with money or words, in favor of that lying billboard, will stand before God in the Judgment, so very ashamed.