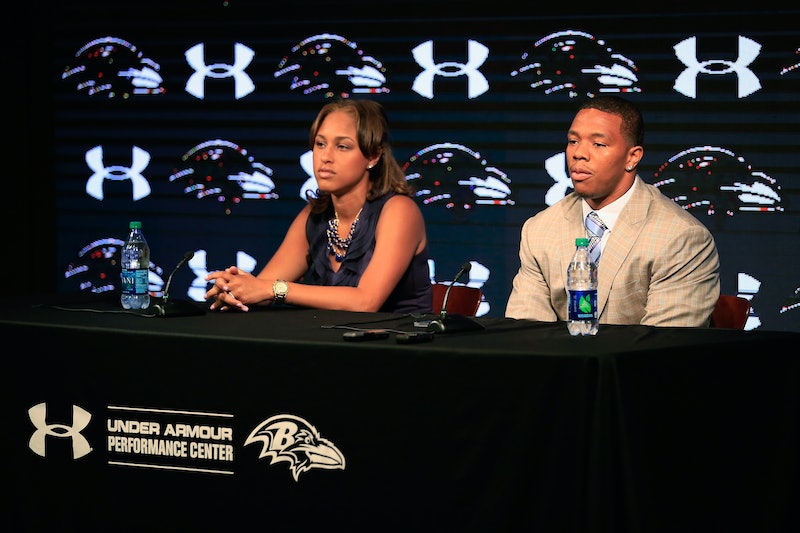 Just in time for the 2014 NFL season kickoff, on Monday TMZ released footage of Baltimore Ravens running back Ray Rice beating his then-fiancée unconscious in the elevator of an Atlantic City casino. Later Monday, after a sizable (and completely fair) backlash, the Baltimore Ravens terminated Ray Rice's contract. The problem is, it's several months too late.

The video is difficult to watch — his punch sends Janay Palmer's head to the handrail, she slumps onto the floor, and he drags her out of the elevator and drops her on the ground, trying to shake her out of her unconscious state. Rice was handed a two-game suspension for the attack, to scathing criticism, as everybody pointed out that the NFL doled out heavier punishments for smoking marijuana.

Put into perspective, of the 29 NFL players who received suspensions for the start of the season, 15 are serving four-game suspensions for violations of the league's substance abuse policy or testing positive for performance enhancing drugs. Will Hill, a fellow Ravens player, is out for six games for repeatedly violating the NFL's substance abuse policy.

Josh Gordon of the Cleveland Browns received a yearlong suspension for repeated substance abuse violations for smoking weed — apparently, the NFL regarded substance abuse as way worse than physically abusing your intended. (The NFL has since revamped its domestic abuse policy.)

News of the incident broke in Feburary. At the time, the Ravens held a press conference for damage control, where both Rice and, inexplicably, Janay apologized for the incident.

Peter King, a columnist at Monday Morning Quarterback (a Sports Illustrated column) wrote that the NFL and Ravens officials saw the footage before deciding on the suspension. A hotel employee working there at the time also told TMZ that league officials were privy to the video.

However, an NFL spokesperson claims they had not seen the video until Monday, when TMZ broke the story.

[A]ny and all information about the incident, including the video from inside the elevator. That video was not made available to us and no one in our office has seen it until today.

Which then begs another question: How were they able to hand out the initial suspension without assessing the severity of the situation? I suppose they didn't consider it serious enough for a more than a slap on the wrist because, though they might've seen Rice dragging Janay's limp, unconscious body out of the elevator, who knows what could have happened in there, right? According to TMZ:

[T]he NFL says the police wouldn't give them the video ... but the league makes no mention of attempting the get the video from the casino itself.

Uproar over the meager punishment prompted the NFL to change its domestic abuse policy, upping the suspension for first-time violators. Second-time offenders will be banished from the NFL but "may petition for reinstatement after one year," states the new policy.

If this termination hadn't occurred, and we'd been seeing Rice on the field come September's end, it would have been a snub to all victims of domestic violence — man or woman — by the NFL.