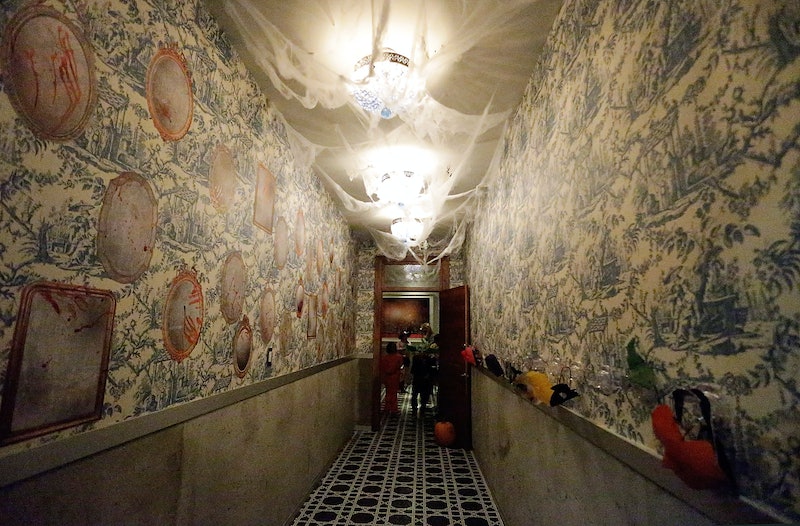 The only way some of us (...ME) make it through horror movies is by reassuring ourselves that none of it is real. The girl writhing in demon-posesssed agony is really just a great child actor with fake blood drizzling out of her ears. The terrifying monster emerging from the closet is just some dude in a fur coat — or better yet, an entirely intangible piece of computer graphics.

If we remind ourselves that all the terror is actually being filmed in front of a green screen with a grumpy director yelling at the zombies on set break, we can relax a bit, because we know they can't really eat us in our sleep. But what happens when the scary story doesn't rely on special effects at all? What happens with the sociopaths and demons and hauntings and cannibalism are all real?

There's nothing to do but dive under the sheets and call for Mommy, I guess. We can assure ourselves that it'll never happen to us, but isn't that what the victims thought, too? We can lock our doors and bolt our windows, but some of these stories are a little more supernatural than that. And the scariest part? This list is just a tiny fraction of all the bizarre, gruesome, spine-tingling things that have happened in this world of ours. There are so many more stories just like these ones.

1. The Endless Construction of the Winchester House

How to get over the death of your husband and child? Build the world's creepiest house, that's how. Sarah Winchester, a wealthy belle from the late 1800s, consulted a medium after the tragic deaths of her loved ones in an attempt to get over her crippling grief. The medium told Mrs. Winchester that her loved ones were killed by angry spirits, and that the only way to appease the spirits was to build an enormous house whose construction never ceased. So Winchester bought property in California and began construction — 24-hours-a-day construction that went on for over 38 years — developing a number of personal eccentricities along the way, like a habit of sealing up rooms, sleeping in a different bedroom every night to fool the spirits, and wearing a dark veil constantly. A caretaker in the 1970s reported hearing footsteps in the room where she died.

2. The Last Tapes of Elisa Lam

At Los Angeles' Cecil Hotel — which has housed two famous serial killers and countless strange nobodies — a 21-year-old student named Elisa Lam met her mysterious end in 2013. When hotel guests complained that the water looked and tasted bizarre, investigation revealed Lam's decomposing body floating in the hotel water tank. An autopsy revealed no presence of drugs or alcohol, and her death was ruled accidental. However, Lam's final hours were caught by an elevator surveillance camera, and include some truly bizarre behavior that has sparked plenty of paranormal theories. The creepiest part is at 1:57, when she steps outside the elevator and begins moving her hands through the air as though she's gesturing to someone — or something.

3. The Sad Dogs of Overtoun Bridge

The word "Overtoun" means "the thin place" in Celtic mythology — the place where the real world and the spirit world grow mysteriously close. On the Overtoun Bridge in Scotland, many suspect that dogs can sense the nearness of the spirit world, as over 50 dogs have leaped over the bridge to their death in the last 50 years. Are they suicidal? Frightened? Tempted? No one knows, but in 1995, a young father threw his 2-week-old son over the bridge, convinced that his son was the Devil, so there's something in the air there.

Read more: Why have so many dogs leapt to their deaths from Overtoun Bridge?

When architect Frank Lloyd Wright built an idyllic estate for his mistress Mamah Borthwick Cheney, neither had any idea that their love nest would soon go up in blood and flames. But one day, when Wright was away, Cheney and her two young children were sitting down for lunch when the cook, Julian Carlton, crept up behind Cheney and buried a hatchet in her skull. He then dispatched with her children the same way and set the house on fire, burning and axing four workers. To this day, no one knows why Carlton did it.

5. The Insatiable Appetites of a Scottish Clan

In the 15th and 16th centuries, legend has it that a man named Alexander "Sawney" Bean lived in a cave with his wife and numerous children, grandchildren, and great-grandchildren, all of whom had similar tastes in dinner fare. The clan would lie in wait for passersby, and then kill, eat, and pickle whoever they found. Centuries later, Bean was immortalized further in The Hills Have Eyes.

In 1931, a depressed man named George R. Sanders decided to kill himself in the most organized way possible: by leaving an explanatory note for the police identifying his body. But when he leaped off the 14th floor of the Dixie Hotel, all organization plans went awry, and he crashed through the roof of a restaurant below and landed at the feet of two nauseated customers and the night manager.

7. The Vampiric Lusts of Erzsébet Báthory

The sadistic Hungarian countess Erzsébet Báthory lived in a lonely castle on top of a hill, where she amused herself by torturing, mutilating, and killing her servant girls with the help of a torture squad that consisted of several old women and one deformed young boy. Báthory would get so much blood out of the girls' bodies that a rumor developed that she collected and bathed in their virginal blood to stay young forever. To this day, Báthory's body hasn't been found.

8. The Unbearable Guilt of Henry Rathbone

Young Henry Rathbone was sitting with his fiancée, Clara Harris, in the same booth as Abraham Lincoln during Lincoln's last night alive. When John Wilkes Booth shot Lincoln in the head, Rathbone attempted to catch Booth, but instead Booth managed to slash Rathbone's arm from the elbow to the shoulder. Years after the assassination, Rathbone's mental health deteriorated sharply, and he continued to blame himself for the President's death. In 1883, Rathbone shot and killed Clara — now his wife — and then stabbed himself in the chest six times before servants rushed to stop him. At an asylum, he was convinced that something in the wall was pouring "injurious vapors" into his head and that people were creeping around outside his room. He was eventually buried beside the wife he killed.

He raped, mutilated, and murdered as many as 800 children for personal pleasure. End of story.

10. The Immortality of Rosalia Lombardo

When 1-year-old Rosalia Lombardo died, her father was so distraught that he hired the best embalmer in the world to preserve her. Nearly 100 years later, the little girl in her glass coffin still appears to be sleeping peacefully.

Read more: The Girl in the Glass Casket

11. The Terrible Temper of Katherine Knight

Katherine Knight hung knives over her bead, tried to strangle her new husband on her wedding night because he only had sex with her three times, and once slashed the throat of a two-month-old dingo puppy in front of a lover. Her biggest crime, though, was killing her lover, skinning him, hanging his skin from a meat hook, cooking parts of his body with vegetables, attempting to serve it to his children, and boiling his head in a pot. She was given the strictest sentence possible under Australian law: Life imprisonment, with her papers marked "never to be released."

12. The Arts and Crafts of Ed Gein

He was obsessed with killing women and turning their body parts into craft projects, like bowls and lamps and belts. Gein was caught, but his spirit lives on in films like Psycho, The Texas Chainsaw Massacre, and The Silence of the Lambs, all of which he inspired.

13. The Reptilian Death of Shaiunna Hare

Baby Shaiunna lived with her 19-year-old mother and her mother's boyfriend, both of whom were serious drug users. Her mother owned a huge Burmese python named Gypsy that lived in an aquarium with a safety-pinned quilt as a "top." One night, while the mother slept under the influence of non-prescription Vicodin, the python crept out of the tank and into Shaiunna's crib, where he wrapped around her and squeezed her to death. She wasn't discovered until morning.