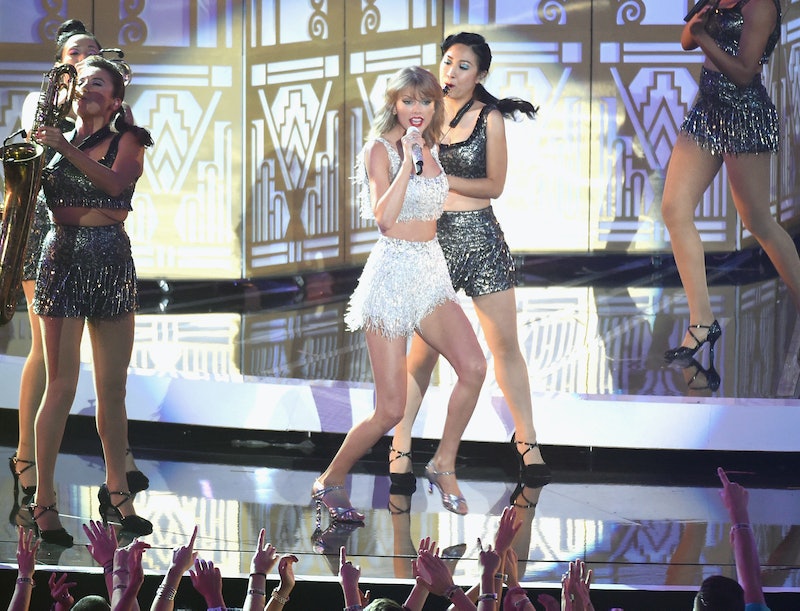 Her new hit single "Shake It Off" extols the virtues of letting negative criticism just roll right off your back, but Taylor Swift seems to be having a hard time taking her own advice lately. Though she's become known as an active dater over the past several years, in a recent interview with Rolling Stone, Swift suggested that she actually hasn't dated anybody in over a year and a half — and the media's obsession with her love life is partially to blame. Swift explained:

I feel like watching my dating life has become a bit of a national pastime, and I'm just not comfortable providing that kind of entertainment anymore. I don't like seeing slide shows of guys I've apparently dated. I don't like giving comedians the opportunity to make jokes about me at awards shows. I don't like it when headlines read "Careful, Bro, She'll Write a Song About You," because it trivializes my work. And most of all, I don't like how all these factors add up to build the pressure so high in a new relationship that it gets snuffed out before it even has a chance to start. And so, I just don't date.

I feel for Swift. I can't even begin to imagine how exhausting it must be to have people analyzing and criticizing every aspect of your love life, day in and day out. Yes, Swift definitely invites a certain amount of this attention by including suggestive lyrics about her romantic relationships in her music, but I have a feeling that it's the relentless slut shaming regarding the amount of men she's been with, in addition to the media's incessant prying into her personal life, that has really made her feel like she just can't date right now. It's sad, but I understand how she's reached this point.

Of course, Swift should feel empowered to date whomever she wants, whenever she wants, haters be damned — but it's just not that easy. Though the advice in "Shake It Off" is certainly well-intentioned, it's hard to hold on to — especially when you're feeling worn down by the world around you. Later in her Rolling Stone interview, Swift clarified her position on dating, saying:

It's not like I've sworn off love. My life is just not conducive to bringing other people into it right now. ... Because it's not bad that I'm not hopelessly in love with someone. It's not a tragedy, and it's not me giving up and being a spinster.

So, Swift hasn't given up on love entirely (which is great) but I still think that her initial explanation for why she isn't currently dating anyone is very telling. It seems like she's feeling a little defeated. Given how successful, articulate, and poised Swift is, it's easy to assume that she has it all figured out, but this interview just goes to show that even global pop stars are plagued by nagging insecurities sometimes. How does the saying go? "They're just like us"? Yeah, that's it.