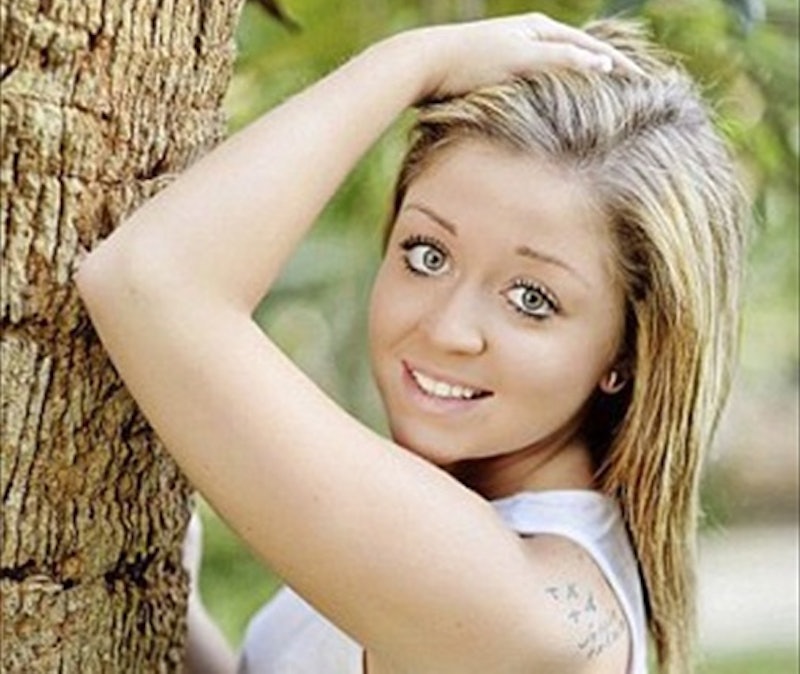 Kaitlyn Hunt, the 19 year-old Florida woman charged for having consensual sex with her then-14 year-old girlfriend is back in jail, after violating court orders by trying to contact her "victim."

In February, Hunt was expelled from high school and arrested on two counts of "lewd and lascivious battery of a child 12 to 16 years of age," after her younger girlfriend's parents called the police. According to the Orlando Sentinel :

According to a court motion Hunt contacted the girl through Facebook and almost 20,000 text messages.

"The state is in possession of over 25 lewd and lascivious photographs the defendant sent the child victim," the motion says.

Hunt is facing lewd and lascivious activity charges for what she has said was a consensual relationship between herself and another girl. The parents of the other girl, who was 14 when the two had sexual contact, filed charges against Hunt.

Prosecutors had offered Hunt a plea deal minimizing her sentence to three years' probation and community service, in return for a few conditions — not contacting the other girl most certainly included. Prosecutors have now revoked the offer, and Hunt's future thus hangs in the judge's hands. She could face up to 15 years in prison.

Gay rights activists have taken an active interest in this case because Hunt's parents have publicly accused the girlfriend's parents of pressing charges out of homophobia. CBS reports:

Hunt played on the basketball team with her younger girlfriend and shared the same circle of friends, Hunt's mother, Kelley Hunt Smith, has said. The two had a consenting relationship that began soon after Kaitlyn Hunt turned 18, and Hunt Smith said she assumed the younger girl's parents knew that.

More like this
What The UK Blocking Scotland’s Gender Recognition Bill Means
By Sam Ramsden
Gen Z Are Twice As Likely To Identify As Queer, According To New Data
By Sam Ramsden
Adam Lambert Called Out The George Michael Biopic Over Potential Casting
By Sam Ramsden
The UK Government Is *Finally* Banning Conversion Therapy
By Sophie McEvoy
Get Even More From Bustle — Sign Up For The Newsletter
From hair trends to relationship advice, our daily newsletter has everything you need to sound like a person who’s on TikTok, even if you aren’t.