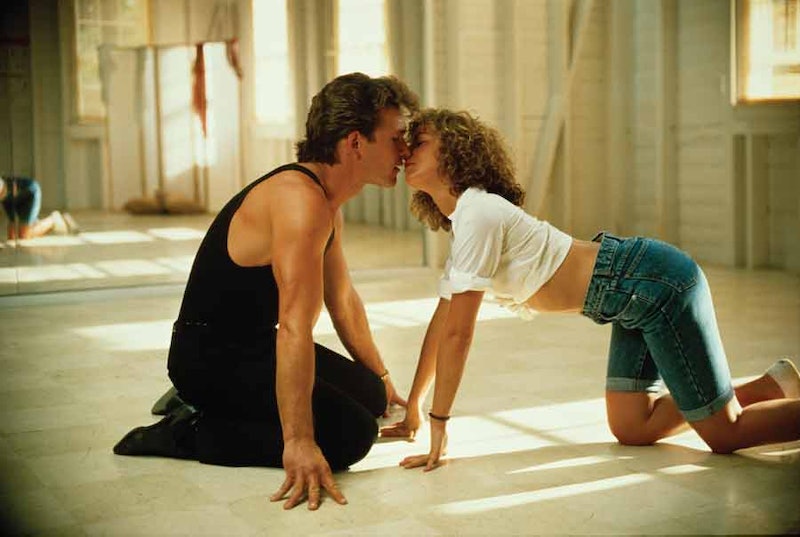 One night in the summer of 2007, my mother sat me down on the couch, made a bowl of popcorn, and popped Dirty Dancing into the DVD Player. I groaned in anticipation. For over a month now, she’d been on a dance-movie binge, forcing me to sit through Billy Elliot, Strictly Ballroom, and Riverdance, and I wasn’t inclined to give up another evening to yet another movie featuring jazz hands.

“I hate movies about dancing,” I whined. It was true; it wasn’t the dancing itself I minded – that was often beautiful – but the plots and dialogue were often contrived or unoriginal, consequences of the film’s genre.

My mom shot me a dirty look. “This is my favorite movie of all time,” she said. “You’re going to see it.”

And so we watched. Afterwards, as the credits rolled, she looked at me, expectantly.

To this day, I have never seen my mother more disappointed.

“What’s not to love?” she asked. “There’s the dancing, and Patrick Swayze, and the music… ”

We went back and forth for a few minutes, arguing over the plausibility of the plot and annoyance of a protagonist named “Baby” (“It’s cute,” my mother said. “It’s demeaning,” I countered). After a bit, though, she gave up.

“One day,” she told me with certainty, “you’ll change your mind. Trust me.”

Of course, my mother was right. Over the next few years, as I spent lazy schoolday afternoons channel-surfing for entertainment, I would often see Dirty Dancing in the TV listings. Like The Parent Trap or Home Alone, it seemed to be one of those movies that were always on some station or another, appearing with almost implausible frequency. I’d watch it “because nothing else was on,” or so I claimed. In actuality, I had slowly grown to love it, having come around from thinking that the film was sexist and dumb to realizing that actually, Dirty Dancing was kind of great.

I don’t know exactly what it was that changed my mind about the film. Maybe it was my age; I had been 13 when I originally saw it, and 15 when I first gave it another try. Perhaps I hadn’t been old enough to fully appreciate the 1960s setting or the appeal of Patrick Swayze. Maybe it was the fact that when I watched it on TV, I was often alone, rather than with my mother, whose love of dance movies had made me immediately wary of any film she made us see. Or maybe it was just a matter of timing – on that night in 2007, perhaps I, impatient and quick to criticize, had just been in the wrong mindset to watch. Maybe I had needed time to fully recover from my mother’s dance-film bender, and only then could I enjoy a sweet summer movie about love and dance without wanting to kill someone. Whatever the reason was, it doesn’t really matter. All I know is that today, after countless viewings, Dirty Dancing has become my not-so-secret favorite movie of all time.

What is it that makes me love it so much? For one thing, there’s the dancing. God, can Jennifer Grey and Swayze move. Every dance scene, from the practice rounds in the studio to the final, climatic end-of-season celebration, is pure perfection. Kenny Ortega’s choreography jumps from fun and fast one moment to sexy and slow the next, but it’s always compellingly watchable. My emotions when watching the film’s dance scenes have ranged from impressed to jealous to extremely sad, as I am awkward, graceless, and 5’2”, and so I, unlike Baby, will likely never discover an inner talent for dance I didn’t know I had.

But mostly, I’m just flat-out entertained. The dancing’s just so fun to watch. This is never more clear than in the famous "Love Is Strange" scene, occurring a little over halfway through the movie. Baby (Grey) and Johnny (Swayze) are dancing for fun, having consummated their relationship a few days prior. They move to the beat of the song – “Love is Strange,” by Mickey & Sylvia – while mouthing the lyrics to each other and play-acting along. Johnny is dressed in a black tank top and pants; Baby, in a white cut-off shirt and jean shorts. It’s an incredibly sexy scene, and the chemistry between the two actors palpable. The dancing is both playful and erotic; it plays off both Baby’s silly, waning innocence and Johnny’s seasoned masculinity. It represents everything Dirty Dancing is: fun, sexy, and stirring.

While I originally considered the film to be misogynistic, painting Baby as a naif who needed a man to gain self-confidence, a few (oh, let's face it, dozens of) repeat viewings quickly changed my mind. Dirty Dancing is a surprisingly feminist movie, thanks much in part to its screenwriter, Eleanor Bergstein. It's the story of a girl who chooses to express her sexuality and desires, acting against the wishes of her family and society and in turn, gaining her independence. This would be an great feminist story for any decade, but the fact that it takes place in the 1960s makes it even more important.

As Baby, a naïve but intelligent Jewish girl from New York, Grey is startling. She plays up Baby’s innocence without making it her defining trait. She’s privileged and naïve, yes, but she is also smart, curious, and bold. That’s not to say she’s flawless; her disdain for her looks-focused sister, the I’m-so-over-this look perpetually on her face – borders on snobbery. Yet Baby is a fully three-dimensional character, and even 26 years after the film’s release, that’s a rarity. Her transformation into a confident, sexy woman is one of the most honest portrayals of a teenage girl’s discovery of her sexuality I’ve ever seen in film.

And as Johnny, the tough, working-class dance instructor, Patrick Swayze is not your average romantic lead. He's the one who's objectified for his looks, not his female counterpart. Yet he decides to use his attractiveness to his advantage, as a tool, not simply a characteristic. His appearance and charm allow him to secure his job each summer, not always through the most honorable means. It’s an interesting reversal of the gender norms we usually see in film. Johnny, who is both proud and defensive of his “damage,” is just as multifaceted a character as Baby. He’s rough and often arrogant, but he’s also surprisingly boy-like, astonished by and even envious of by Baby’s loving relationship with her parents. It’s sad in its sweetness. The roles are well-developed, but Grey and Swayze fill them with intense depth. The actors' reported dislike for each other on set translates as perfect sexual tension onscreen, their characters’ wildly different personalities and backgrounds adding to the complexity of their relationship. Their intense, surprising chemistry gives the movie a profoundness it might have lacked had the characters been inhabited by anyone other than Grey and Swayze.

There’s something so magical about Dirty Dancing. It transports the viewer back to a time where teenagers spent their summers learning to fox trot with their parents instead of taking Teen Tours around Europe, where true love can be found, lost, and found again in the span of three weeks. It’s a coming-of-age and love story combined into one, capturing the familiar emotions of lust, love, and longing with honesty. Even now, in 2013, there's so little like it. Movies about young love tend to involve excess drama, action-packed suspense, or vampires. Yes, there are the occasional Before Midnights and Like Crazys, but they are small, indie films that don't play for mass audiences. Instead, the romance films that are played for crowds, like Twilight, are the opposite of feminist. Calling their female protagonists "heroines" is too big a stretch, as they constantly need saving by the films' male leads. As for simple stories about human relationships, where both leads are fully imagined? They're few and far-between.

And so six years after I was first made to watch, I have seen Dirty Dancing, the movie I had once casually dismissed as boring and stupid (“What does ‘nobody puts Baby in a corner’ even mean?,” I had asked my exasperated mother), more times than I am willing to admit. I know all the songs, can quote all the lines, and have read enough IMDB trivia to fill a “The Making Of” book. There is nothing left about Dirty Dancing that I don’t know, no scene unanalyzed or factoid un-Googled. And yet I keep watching. At least once a summer, and probably a few more times throughout the year, I settle down on the couch, grab a snack and pop in the DVD. Sometimes I watch it alone; other times, with friends who also love the movie. Mostly, though, I watch with my mother. It’s our favorite film.