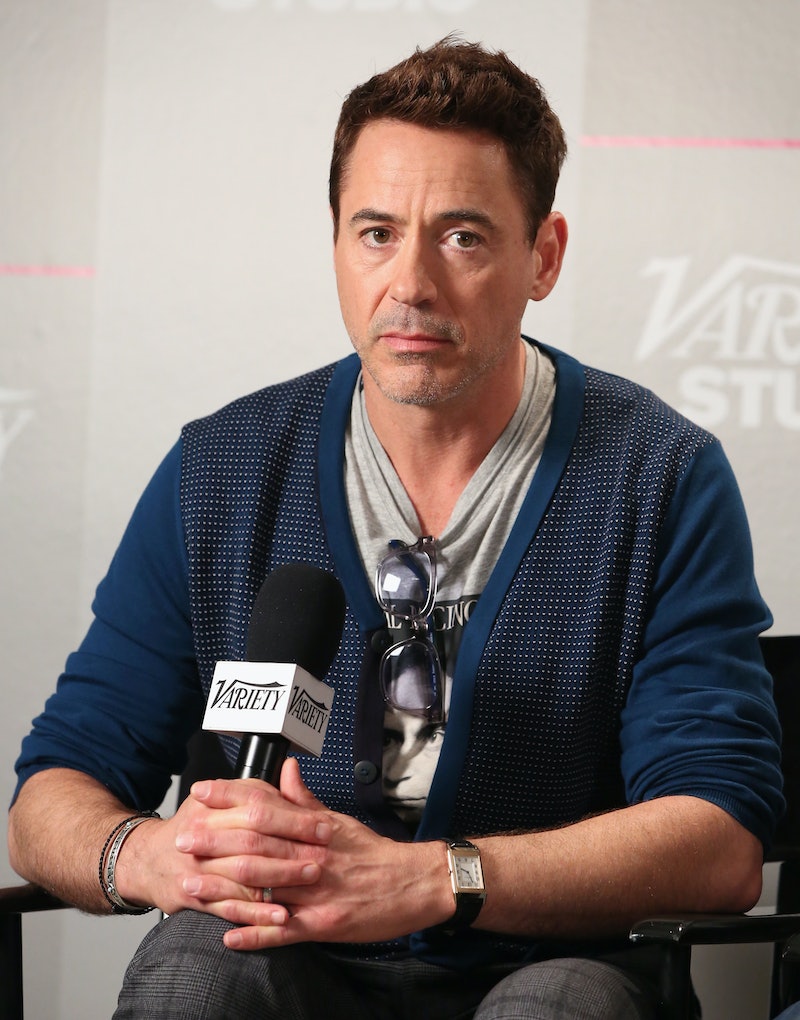 Robert Downey Jr. is one of the biggest stars in the world right now thanks to the insane success of Marvel's Iron Man franchise, but that wasn't always the case. It's no secret that at one time in his career, Downey Jr. was struggling with some pretty serious addiction issues. That's why, when his son Indio Downey was arrested for cocaine possession, it was tragic but unsurprising. Addictive patterns tend to run in the family, after all, and Downey Jr. made it clear that he was going to support his son through it. In a candid interview in the October 2014 issue of Vanity Fair, Downey Jr. reflected on his past addictions and their effect on his son in a way that was truly inspirational.

"Job one is get out of that cave," said Downey Jr. of his time in rehab after being arrested in 2000. "A lot of people do get out but don't change. So the thing is to get out and recognize the significance of that aggressive denial of your fate, come through the crucible forged into a stronger metal. Or whatever. But I don't even know if that was my experience."

Downey Jr. had been getting high since he was a kid and that only continued as he broke into the acting business, resulting in two rehab stays (and two escapes from said rehab stays), being fired from Ally McBeal, and being found in possession of everything from cocaine to methamphetamines to heroin. Now it seems that Indio Downey has followed in his footsteps, which Downey Jr. says is understandable.

"He's his mother's son and my son, and he's come up the chasm much quicker than we did," he said. "But that's typical in the Information Age; things get accelerated. You're confronted with histories and predispositions and influences and feelings and unspoken traumas or needs that weren't met, and all of a sudden you're three miles into the woods. Can you help someone get out of those woods? Yes, you can. By not getting lost looking for them."

Downey Jr. is far from the only actor in Hollywood to struggle with, or have struggled with, a troubled past or drug addictions. Angelina Jolie and Drew Barrymore come to mind as two celebrities who have overcome the kind of background that could have broken other people completely. What makes Downey Jr. stand out is how willing he is to be open and candid about those experiences, especially if it helps someone else. There's no doubt in my mind that the things that he said in this interview are things he has been saying to his son in order to help him through his current issues, because Downey Jr. has been there. He more than anyone else gets every aspect of what his son is going through.

And it doesn't end there. Downey Jr. is developing a series for Showtime that is about a California rehab center, further turning his negative past experiences into something good, into something that will help him grow as a person and as an actor. Combine that with the fact that Downey is famous for playing characters who have struggled with addiction — whether it's Tony Stark becoming a raging alcoholic in Iron Man 2 or Sherlock Holmes being, well, Sherlock Holmes — and one line from Downey Jr.'s interview really resonates long after you reach the end.

"I am not my story," Downey Jr. said and it's true. He's so much more than that and he has earned the wonderful place that his career is in right now.