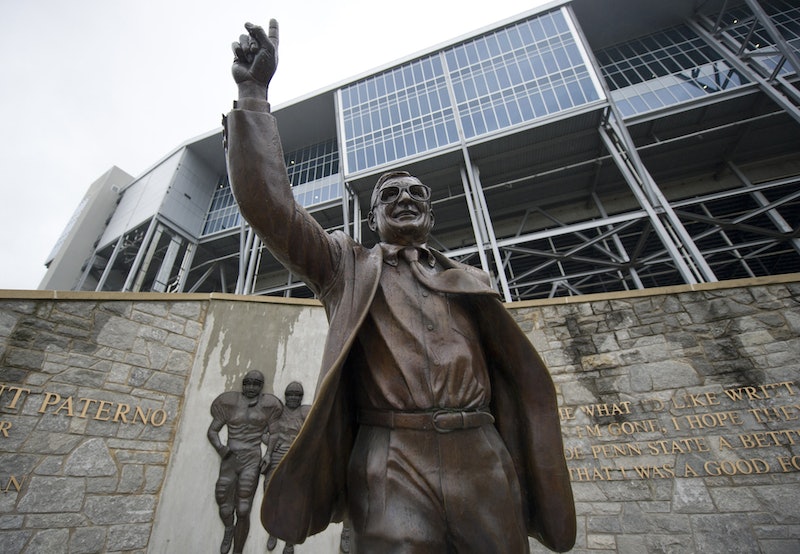 Thousands of Pennsylvania State University students gathered on the College Station campus Monday night, chanting "Joe Paterno," waving handmade placards and flashing T-shirts that read, "We're back!" The cause for celebration? Just two years after they were instated, the NCAA lifted its sanctions on Penn State's football program for the sweeping child sex abuse scandal that ensnared many top-level officials, including Paterno, the beloved, former head football coach. But were these sanctions — meant to punish the school for favoring football over the safety of young boys abused by assistant football coach Jerry Sandusky — lifted too soon?

The NCAA sanctions placed on Penn State in 2012 were unprecedented: a four-season ban from playing in the postseason (so no championship bowl games); the loss of player scholarships, which harms the process of recruiting players; and a $60 million fine. The NCAA is now restoring all of Penn State's 85 player scholarships, effective in 2015. The football team can also return to postseason play, starting with this season.

Paterno, who was one of the most celebrated coaches in college football, also had his wins between 1998 and 2011 vacated, because he had knowledge of Sandusky's crimes. For Penn State fans, this was a big deal: Paterno was the winning-est coach in college football, but has now fallen to the No. 12 spot. Penn State even dismantled its Paterno statue following the scandal. At this time, Paterno's wins are not being restored, and there's no word yet if the statue will be put back up on campus.

While some see this as an acknowledgment by the NCAA that they were too harsh on Penn State, others are wondering if Penn State got off too easily. After all, the NCAA has instated sanctions on other schools for far lesser crimes than child sex abuse committed by a staff member of the football team.

Let's Compare To Another College

The University of Southern California (full disclosure: USC is my alma mater) was the last school to receive NCAA sanctions before the Penn State scandal. In that case, the NCAA found that star USC football player Reggie Bush and his family received illegal cash and gifts, such as a limousine ride, airplane tickets and hotel stays, from marketing agents. Taking these gifts meant that Bush effectively surrendered his amateur athlete status, which is needed to play college sports. (College athletes are seen as amateurs, not professionals, which is why they also can't make endorsement deals).

In 2010, the NCAA placed sanctions on USC that were seen as controversial then, too: a two-year postseason ban; vacated championship wins; and a maximum of 75 scholarship players on the football roster (the maximum is 85), which means a loss of 30 scholarships over a three-year period.

Unlike Penn State, which was able to have some of its sanctions lessened in 2013 — and now mostly restored — USC was unable to convince the NCAA to ease up. The NCAA denied USC's appeal to reduce the sanctions, and the effects of the sanctions were felt over the last four years. The school's football program was crippled, and is still working to find its footing. "It's been a long four years," USC Athletic Director Pat Haden told The Los Angeles Times in June.

So, what's changed? Well, the NCAA claims Penn State has made "progress" since the Sandusky child abuse scandal broke. The "progress" the NCAA points to is a child abuse task force, which was created before the sanctions were instated, and several million-dollar checks written out to funds for victims.

Harris Pastides, a member of the NCAA's board of directors, said on Monday in a statement:

Penn State has made remarkable progress over the past year. The board members and I believe the executive committee's decision is the right one. It allows both the university and the association to continue to move toward a common goal of ensuring that educating, nurturing and protecting young people is a top priority.

But the NCAA is also arguing that because child sex abuse is not a direct violation of the organization, but a criminal offense, the NCAA shouldn't get involved — it's simply a police and judicial matter. This is an argument you often hear when discussing on-campus sexual assault, and how university administrations should handle it — if at all.

Meanwhile, in USC's case, Reggie Bush's actions were in direct violation of NCAA rules. However, he wasn't breaking any criminal laws, and it's still debated if his violations truly benefited the USC football program.

Still, it's a big change from the NCAA in 2012, which attempted to uphold the integrity of collegiate football while also admitting there's a clear problem when child rape and sexual assault takes a backseat to a team's winning record. Perhaps the NCAA realized it tried too hard to play "moral police," but the so-called progress of Penn State doesn't seem like enough to justify the reversal. After all, when you have thousands of students turning out to cheer for the lift of sanctions that were put in place because of decades-long, on-campus child abuse..well, where's the progress?

The lesson here is one of maintaining the appropriate balance of our values. ... If you find yourself in a position where the athletic culture is taking precedent over the academic culture, a variety of bad things can occur. One of the grave dangers stemming from our love of sports is that the sports themselves become too big to fail, indeed, too big to even challenge. The result can be an erosion of academic values that are replaced by the value of hero worship and winning at all costs. All involved in intercollegiate athletics must be watchful that programs and individuals do not overwhelm the values of higher education.

Then, the NCAA was sending a message to college football programs: Players and staff don't get a pass, no matter how much revenue and prestige they bring in for the school.

Are they still sending one now?