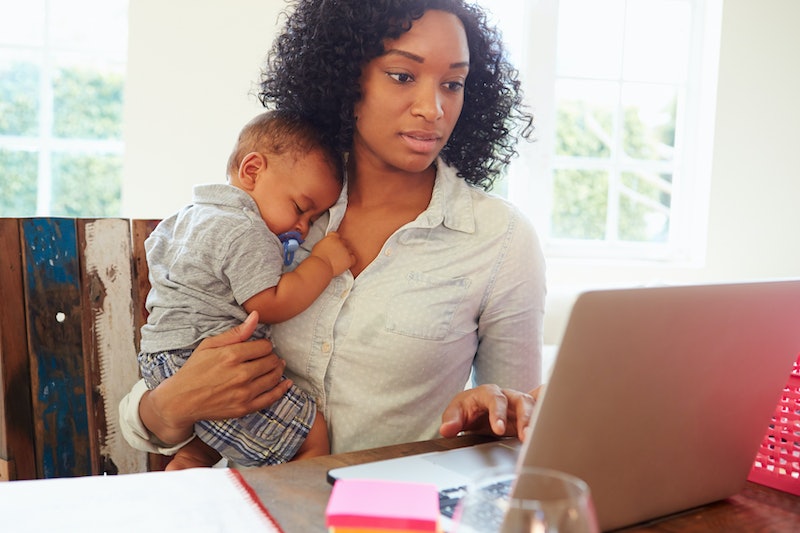 The motherhood penalty and the fatherhood bonus aren’t new concepts, but new data from UMass Amherst is reinforcing what we already knew. The penalty/bonus concept basically says that mothers are less likely to be hired for jobs, be paid as much as their male counterparts, or be considered as competent. Meanwhile, fathers are more likely to be hired and will actually be paid more. Even when controlling factors such as hours, types of jobs, and salaries of spouses are taken into consideration, the data stays the same. Now, this phenomenon isn’t because of the performances of mothers and fathers in the workplace — it's because of the prejudicial expectations of employers.

Apparently, as a whole, employers haven’t accepted that women can be mothers and an asset to the work place. These types of biases seem to be based in the ideas of women as caregivers and men as breadwinners. When men have children, they are seen as more reliable and committed to work because they have mouths to feed. When women have children, they are seen as more flakey because their attention will supposedly be divided between their children and work, and she couldn’t possibly find a way of being a good mother and employee. These conclusions were drawn from a 2007 study in Chicago Journals entitled “Getting A Job: Is There A Motherhood Penalty?”

And now new data has come out related to this penalty. Michelle Budig from the University of Massachusetts, Amherst, found that this bias has the greatest effect for mothers who can least afford it. Budig’s paper, The Fatherhood Bonus and The Motherhood Penalty: Parenthood and the Gender Gap in Pay, reports that males with high-incomes received the highest pay increase for having children, and women with the lowest incomes pay the biggest price for becoming mothers. Data from the National Longitudinal Survey of Youth from 1979 to 2006 was analyzed, and Budig found that for every dollar a man earns, unmarried and childless women earn 96 cents, while married mothers earn only 76 percent. In general, men who became fathers saw an earning increase of 6 percent, while women who had children saw an earnings decrease of 4 percent per child.

So what can be done about this gap? Budig suggests implementing public policies that lessen the strain on working mothers, such as publicly funded childcare and moderate-length paid parental leave.

Overall, it’s disappointing to see that these types of gendered workplace issues, which are solely based in discrimination, are still a relevant problem. The realities of the motherhood penalty are particularly upsetting, because they are based on such sexist and reductive reasoning that it is hard to take seriously.

Excuse me while I bang my head against a wall.