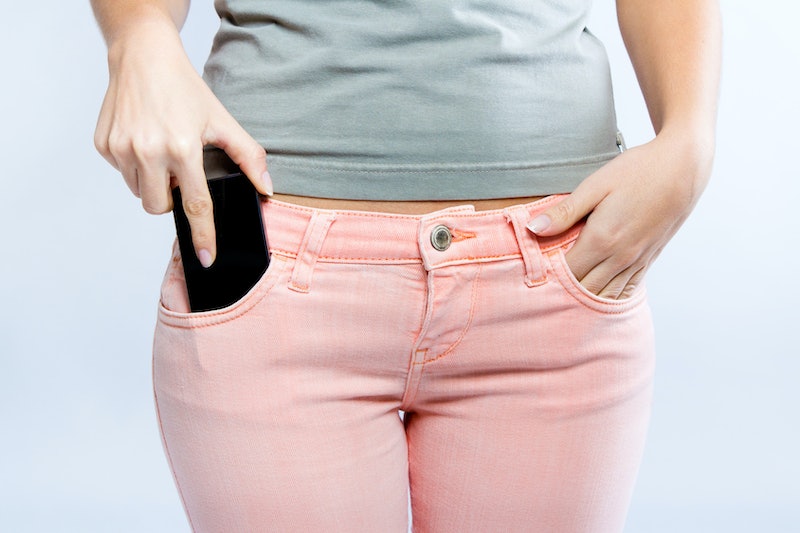 Technology is so weird. Remember when we were fascinated by tiny things that could get the job done? No more. Apple rolled out the iPhone 6 and iPhone 6 Plus on Tuesday, and the tech giant has finally given into the oversized smartphone trend already adopted by the likes of Samsung. As the phones start encroaching on iPad mini territory, have the new iPhones finally outgrown my pocket? Yes, probably — but they haven't outgrown men's.

The iPhone 6 is 4.7 inches diagonally, and the iPhone 6 Plus is 5.5, compared to the iPhone 5s, which has a mere 4 inch diagonal. As rumors circulated this summer about the screen size of the newest crop of iPhones, Time's Tim Bajarin tested out similarly-sized smartphones to see if they were pocket-friendly. His estimations were on-point: he toted the Amazon Fire (4.7 inches) and the Samsung Galaxy Note 3 (5.7 inches).

Bajarin reported that the Amazon Fire fit comfortably in his front pocket, but the Galaxy Note 3 wouldn't make the cut. He was, however, able to fit both smart phones into his back pockets.

Now, that's for men. Women may not be so lucky with the new iPhones.

Bajarin gave the two phones for women in his workplace to test out, and reported that they fit "OK" in the front pocket. They should show me these magic jeans, because I call bullshit on that.

With any pair of jeans that I own, the top of my iPhone 5s barely peeks out of my back pocket. Forget about the front pocket of my jeans, though. If you wear any kind of skinny jean, or most cuts, for that matter, an iPhone 5s won't fit comfortably in your front pocket. Admittedly, I have a rather bulky Lifeproof case, but if you knew my phone history you would understand. Still, it fits snugly in the back, and doesn't poke out enough to be a bother or make me paranoid about losing it.

Now, add .7 inches onto that, and the phone is sticking out by almost an inch. And 1.5 inches? That's enough hanging out to make it easy for someone to sneak it out of your pocket.

It's safe to say that women often have tighter jeans with smaller pockets. Back in August, Apple released a breakdown of its company diversity in August, which showed that 80 percent of its workforce is men. So for men creating for the comfortability of men, it seems logical that women's pocket sizes weren't a huge factor in the new iPhone's design. I mean, don't all women carry purses anyway?

Still, even the dudes are fretting about the mega-sized phones.

There are two possible solutions here: Bigger pockets for jeans. Or smaller phones. What'll it be, world?

More like this
15 Years Of The iPhone, In Pictures
By Emma Carey
Using Your Pet’s Name As A Password? Here’s Why You Might Want To Change It
By Cristina Sanza
Poshmark Vs. Depop: How The Reselling Apps Compare
By Emma Carey
7 Expert-Recommended Tips For Using Body Makeup
By Audrey Noble
Get Even More From Bustle — Sign Up For The Newsletter