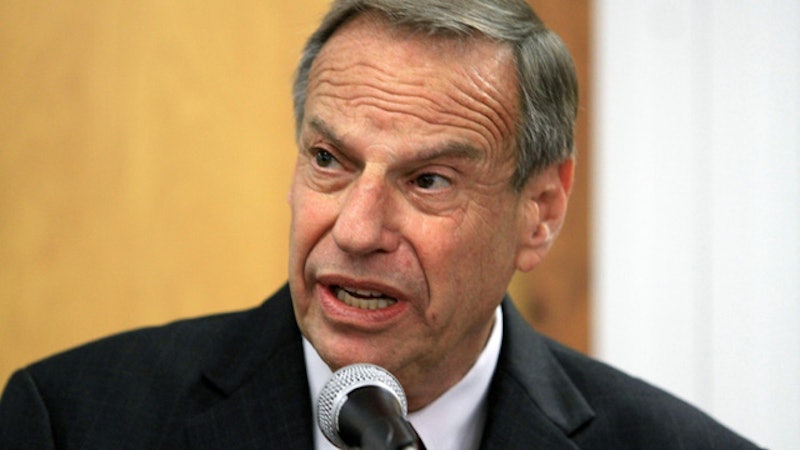 Accusations of San Diego Mayor Bob Filner’s alleged sexual harassment just keep piling on, and so does the pressure on Filner to resign. But while the San Diego Democratic Party has formally asked him to step aside, at least the national party still has his back, right?

Maybe not. At its summer meeting later this week, the Democratic National Committee will vote on a resolution calling for Filner to resign. DNC chair Debbie Wasserman Shultz has already personally asked that Filner do just that, and so it doesn’t seem unreasonable that the resolution might pass.

The resolution, obtained by CNN, reads in part:

"We cannot reassure voters that a vote for a Democrat is a vote for a champion for women unless Democrats walk our talk on equality and take firm action in accordance with our values and stand up for women by condemning [Filner’s] behavior and calling on him to immediately resign as Mayor of San Diego.”

This suggests that while Democrats do enjoy more support from women than Republicans not all of them take this support for granted. The national party seems to be keeping its eye on any developments that could erode this support, with Filner’s alleged sexual improprieties being Exhibit A, and the fate of this resolution could be an indicator of the party’s plans going forward.

If the resolution condemning Filner passes, it would imply that Democrats view their support on issues of gender as possibly being transient. After all, while women went for President Obama over Mitt Romney by an 12-point margin last year, it really wasn’t until midway through the 2012 election that Democrats began making obvious moves on issues of gender equality, and it’s not as if Democrats have an iron-clad reputation of protectors of women’s interests. A call for Filner to resign would signal loudly to prospective voters that the party takes its stances on gender seriously, and wasn’t just pandering in 2012 to win votes.

If the resolution fails, it would suggest that Democrats aren’t, for whatever reason, particularly concerned about losing support from folks with progressive stances on gender and women’s rights. But it would be mighty foolish, not to mention arrogant, for Democrats to assume that women will vote for them simply because they’ve got a “D” after their names.

Whichever way the vote goes—and we’re guessing the resolution will pass—the DNC’s actions this week could say a lot about how serious the party takes its newfound reputation as, in its own words, “a champion of women.”