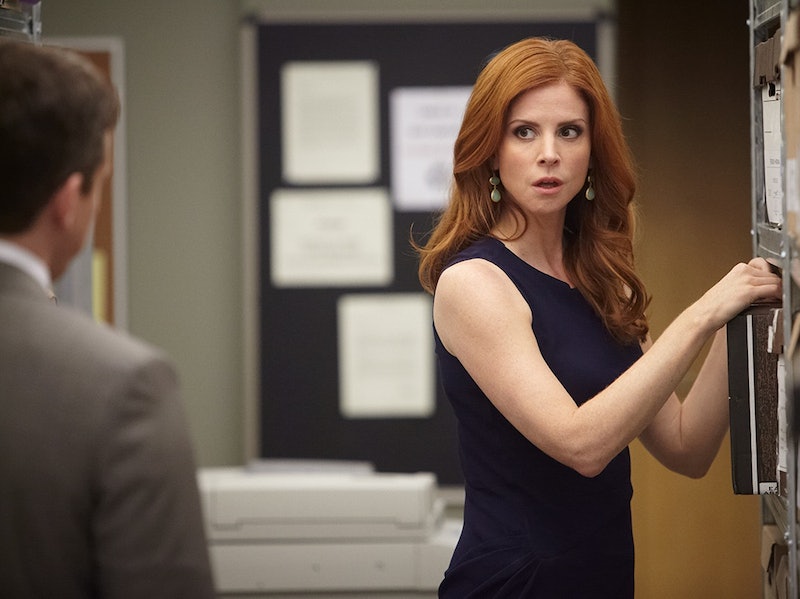 Luckily for me, the not-so-avid Suits viewer, Tuesday night's episode was a flashback-fest.

PRESENT DAY: We begin with Donna and Harvey bickering about his being made partner. The conversation quickly turns to his obvious jealousy regarding her relationship with Stephen. Before I can speculate about their backstory, we’re treated to a flashback.

FLASHBACK A: Donna, Cameron, and Harvey work together at another firm. She plays hard to get, Harvey is into it, and then, because the universe loves me, everyone launches into their best Sean Connery impressions. It’s what we call a “magic moment.”

The firm incarcerated two men for murder, and Donna and Harvey realize that some information was not disclosed during the trial. So Donna tells Harvey to do the right thing and come forward with these fresh details, but Harvey tells her to bury it because Cameron said so. Okay, so we all hate Cameron, right? Cameron tells Harvey that if they disclose this information, the two wrongly-incarcerated men will murder Harvey’s dad immediately. Yikes.

Harvey eventually comes clean with the hidden details and resigns from Cameron’s firm. Yay, Harvey! He visits Donna’s apartment and she reveals she too is a quitter. She holds up a can of whipped cream and they go to pound town.

Jessica hires Harvey and Harvey hires Donna. They promise to never speak of the whipped cream night. And Harvey gives her whatever number she chooses as a signing bonus.

FLASHBACK B: Mike is in college. Not Harvard, though. Don’t get it twisted. He lives with Trevor. Mike receives an acceptance letter from Harvard. What?! He plans on transferring. Oh, okay. The two go to a party and get ripped off in a poker game by some frat dudes. Later, we find out that Trevor needed that lost poker money to pay back drug dealer Omar. Mike sells a stolen math test and the two of them reimburse Omar. In addition to dealing narcotics, Omar enjoys the following: The Wire and Pulp Fiction. Cool guy, this Omar.

Trevor gets in trouble for selling the test. I can tell Mike is a good person because he turns himself in. Dumbo Trevor sold the test to the dean’s daughter. Subsequently, the dean got the axe. His last course of action? Ensure Mike never goes to Harvard. Ah, there’s the rub.

PRESENT DAY: Mike tells Rachel to go ahead an pursue her Stanford dreams and then presents her with his old Harvard acceptance letter. This Mike is such a straightforward fake lawyer!

Just as everyone feels confident that Cameron does not actually have a witness that can and will screw over Ava’s case, he says, “Stephen Huntley led me to the witness.” Stephen cannot stop salting Harvey’s game!