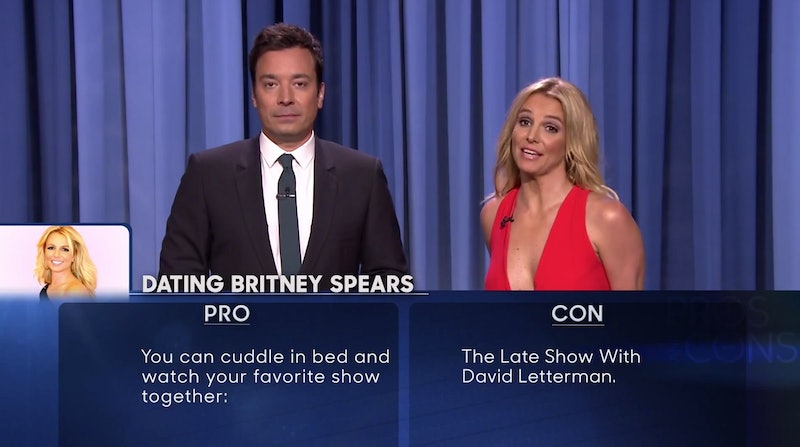 Britney Spears is single now. Hopefully by now we're all aware of the incredibly awkward news that Spears was cheated on by David Lucado and kicked him to the curb — the awkward part being that the cheating incident was captured on a video that was circulated around Hollywood before Spears' father bought it to keep it out of everyone's grubby little fingers. Since then, however, Spears has been in very high spirits and certainly not afraid to laugh at herself as she did during her appearance on The Tonight Show Tuesday night. In fact, Fallon made Spears a Tinder profile and then ran through the pros and cons of dating her so everyone knew what they were getting into.

Although Spears was given the password to the profile that was made for her by Fallon, she didn't seem very pleased to have joined the ranks of celebrities who are actually on Tinder. In fact, her polite befuddlement over the move put her acting on par with Jennifer Aniston's in Jimmy Kimmel's Friends reunion sketch. I've already got my fingers crossed that Spears doesn't delete her Tinder, although she might want to take "This better work, bitch"out of her profile.

This was immediately followed by Fallon and Spears running through a list of pros and cons of dating Spears, including that "I'm Not a Girl, Not Yet a Woman" was a great song and that she had been hit on by ten people since entering the studio. I'm not sure how that's really a pro, but, then again, we all know that most would be running to Spears' Tinder profile just because she's "Britney, bitch", as she herself says later in the sketch, rather than because of anything else.

Check out the sketch below.