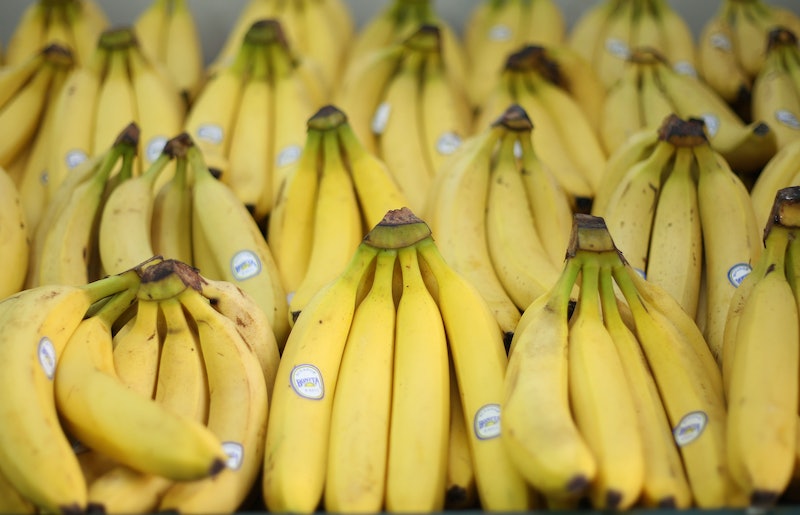 OK, listen, here's some lifelong advice for you: Never, ever touch that little white lump on a banana. Seriously. Never. Touch. The lump. Why not, you ask innocently? Earlier this week, a British woman found super poisonous, deadly spider eggs on bananas she'd bought from Tesco, a grocery chain — and, dude? It's not the first time.

The story might just be the most horrifying, retch-inducing thing you'll read all day. Abby Woodgate, your average mother-of-one, bought some bananas from Tesco, a reputable, multinational grocery chain. She'd bought them from the store's website, and so happily received them at her home soon after. Mmm, fresh bananas, brought straight to your door! What could be better?Except, it then turned nightmarish. She noticed a white patch, a lump-like thing on one of the fruits. She thought it was mold — what else would she think? — and decided to try and get it off, so she poked at the lump with a toothpick. Big mistake. Instantly, the lump burst, revealing dozens of glimmering, poisonous spider eggs : spawn of the world's deadliest arachnid, the Brazilian wandering spider. As Woodgate told The Independent:

I couldn’t believe it when the little cocoon opened. I thought it was just some mould and I was trying to get it off so I could use the rest of the bunch. Even when I saw what was in it – it looked just like frog spawn – I still didn’t think the worst. But then it dawned on me and I jumped and threw them in the bin.

And it's lucky she did. The critters are incredibly toxic: not only can contact with the venom mean incredible pain, the stuff can also cause muscle paralysis and asphyxiation. (In other words, death. That lump on her bananas could cause death.) It's no wonder the pest controllers told Woodgate that she'd need to burn anything and everything the eggs came into contact with. Said Woodgate:

If this were a one-off, freak incident, you might be able to get over it. Freak accidents happen, after all.

But it wasn't a one-off. Just a few months ago, an entire English family had to leave their house, after finding Brazilian wandering spiders on some bananas they'd bought — as they were eating them. In April, a nursery had to close down for a whole week, because they too found the deadly arachnids lurking on their bananas. In fact, according to the Guardian, this particular type of spider has "a tendency to hide in banana bunches."

And if you're seeking reassurance in the fact that you're far, far away, here in the U.S., be aware: Other poisonous spiders, like the black widow spider, have been known to set up home on grapes in your trusted local Aldi, as close as St. Louis.

At least the Brazilian wandering spider (sort of) has a use — it can cause erections that last for up to four hours. So... make of that what you will.

More like this
If You Have Pets, You Probably Don't Realize You're Making These Common Mistakes
By Mackenzie Edwards
The 5 Best Brushes For Short-Hair Dogs
By Tiana Crump
The 5 Best Alternatives To Pyrex Lids That Are Sure To Fit
By Maria Cassano
This Luxe Cookware Is Beloved By Celebrity Chefs — And It’s Majorly Discounted For Black Friday
By BDG Commerce
Get Even More From Bustle — Sign Up For The Newsletter