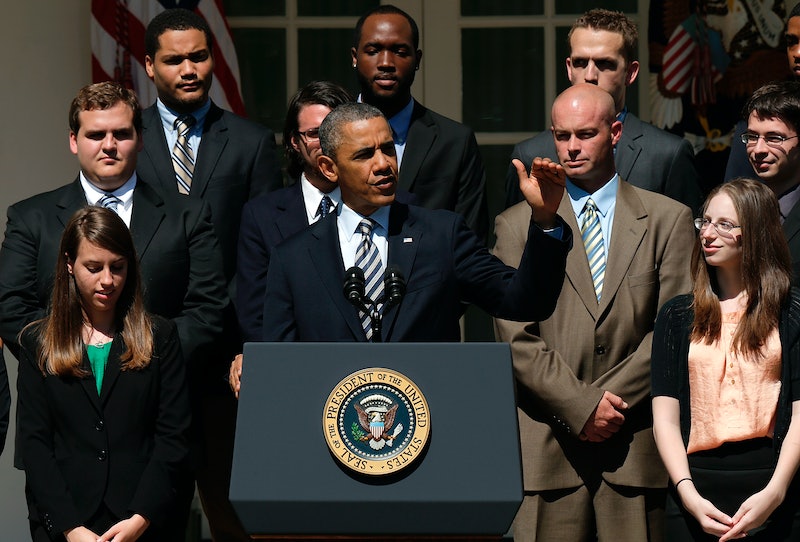 At this to the overdue list: President Obama will take on the challenge of escalating college costs this week.

In an email to his supporters Obama said that he would lay out proposals to help students and families cope with tuitions that have tripled in the the last three decades, leaving the average student with about $26,000 in loan debt.

“To create a better bargain for the middle class, we have to fundamentally rethink about how higher education is paid for in this country,” he wrote. “We’ve got to shake up the current system.”

Though the president did not give any hints about his proposals, the White House intimated that using federal aid as an incentive for schools to stick to budgets might be a part of the plan. During the 2012 campaign Obama put forth several suggestions on the topic, including decreasing federal aid to schools that did not keep a lid on costs.

White House spokesman, Josh Earnest said that this week's proposals "would go beyond what the president rolled out” previously. President Obama will unveil his new proposals for reigning in the nation's higher education institutions during a two-day bus tour that will take him through upstate New York and Pennsylvania and include several town hall style meetings at local colleges and universities.

Earnest says that the new proposals won't make everyone happy, but are aimed at helping the middle class achieve the dream of a college education without burying themselves or their parents in debt.

Critics are unclear of how a new plan would work — or how legislation would get passed anytime soon. Most changes that would allow for some leeway in federal aid to colleges would require Congressional approval, a daunting and largely fruitless task in recent years. And for plans that wouldn't require Congressional approval, the change would be so small that it's unlikely to have much of an impact.