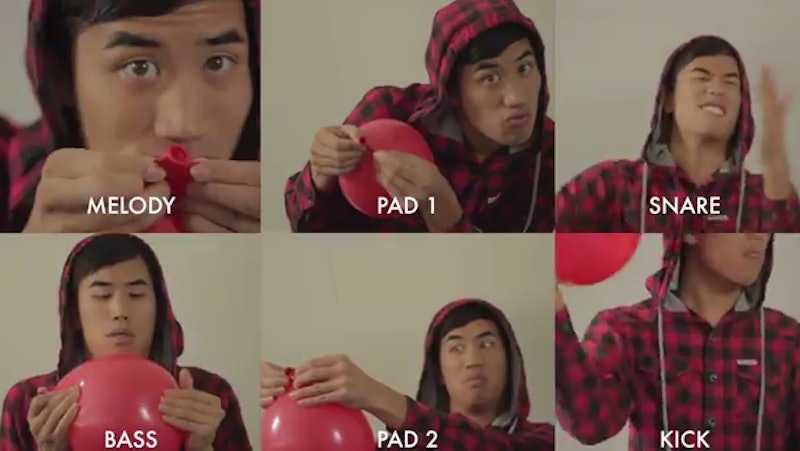 Literally-minded YouTube videos are having quite the week. First, we got the too-good-to-be-true DuckTales theme song with real, live, adorable ducks, and now we have the opportunity to have our mind blown by the super talented Team Andrew (Andrew Huang), as he performs the oh-so-catchy '80s song "99 Red Balloons" with red balloons. Let's face it, blue balloons would never make the cut. While those ducks were certainly adorable and fell into the "awwww, ducks!" category, this will make your jaw drop. Who knew that balloons could make music like this? This is art, folks.

And let it be known that Huang originally intended on making this a red balloon opus. "Thought about using 99 balloons, but it worked with four so mehhh," he writes.

For those of you who want more of this unique form of music, you can jet on over to Germany, as Huang will be making pit stops there during his upcoming tour. After all, people want to see and hear found object music (provided it's not bombarding them during their morning commutes).

But how is Huang dealing with his newfound viral success? He has taken to writing puns — look no further than his posts on his Facebook page, including this one: "Well, I guess this balloon video is really... blowing up."

You can watch the video below.