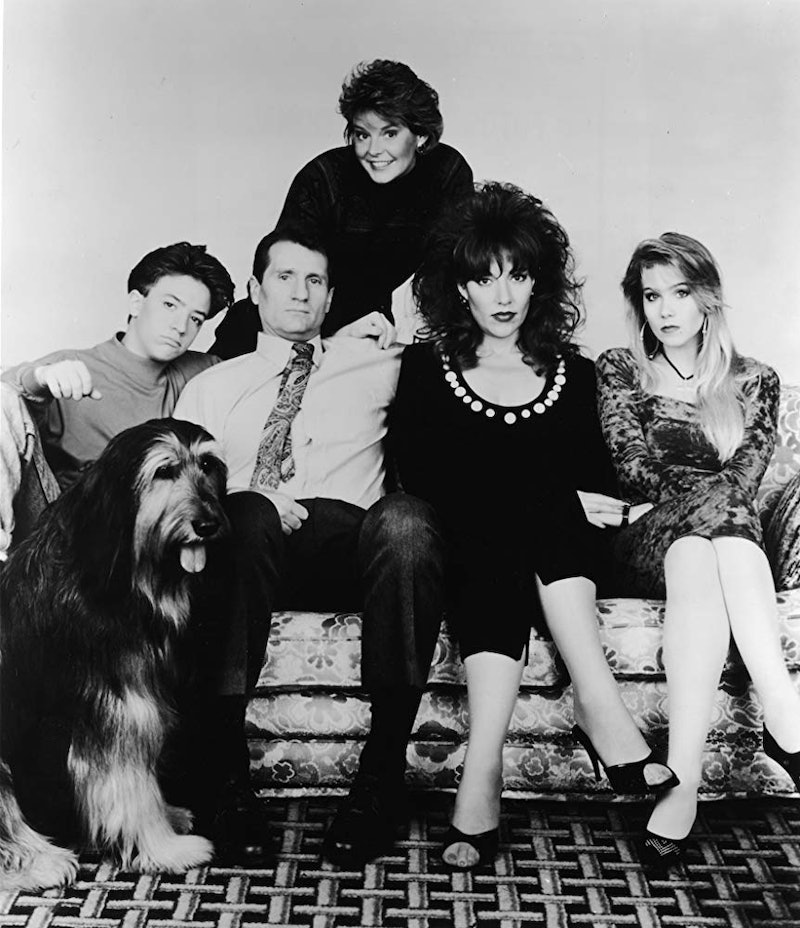 It took 17 whole years, but the cast of the ultimate '90s sitcom, Married With Children , finally reunited this week to support Katey Sagal, who portrayed Bundy family matriarch Peggy in the series, as she received a star on the Hollywood Walk of Fame. While the cast actually reunited once back in 2009 to support David Faustino (Bud Bundy)'s web-series Star-Ving (not to mention, O'Neill guest-starred in an episode of Sagal's now-cancelled sitcom, 8 Simple Rules , in 2005) this is the first highly-publicized reunion since Married With Children ended in 1997, so it's sort of a big deal. The Bundy family is officially back together again.

However, though it's been nearly two decades since the show ended, it almost feels like it never went anywhere considering all that the cast has been up to since its conclusion. Christina Applegate largely stayed in the spotlight with multiple sitcoms and movie roles, Sagal is busy playing the fiercest badass on TV on Sons of Anarchy, and Ed O'Neill is just out there winning a bunch of Emmys in Modern Family alongside a new TV wife played by Sofia Vergara, and Faustino lends his voice to The Legend of Korra — their careers have all, for the most part, remained consistent, which can be tough after a hit sitcom. Kudos to the Bundy family!

So, what exactly has the cast been up to in the years since the show ended? Let's break it down:

As aforementioned, Sagal is no stranger to television even 17 years after Married With Children ended for good. She lent her voice to Futurama as Turanga Leela between 1999 and 2003 — then again between 2010 and 2013 — and also starred in 8 Simple Rules...For Dating My Teenage Daughter between 2002 and 2005 as another family matriarch, Cate, alongside the late John Ritter. In 2008, Sagal joined the cast of FX's biker gang drama Sons of Anarchy as hardcore biker chick Gemma Teller Morrow, and she's currently still starring in the series as it enters its seventh and final season. Who would've thought one day, Peggy Bundy would go on to become the biggest badass on TV?

On second thought, maybe we shouldn't be shocked.

Ed O'Neill's spent the last few years on, oh, just TV's current biggest sitcom Modern Family — maybe you've heard of it? — so his exposure hasn't really been lacking either. Prior to that, he starred in a short-lived 2007 HBO series called from John From Cinncinati, and he also appeared in a campaign ad for President Barack Obama back in 2008 as his Married With Children character, Al Bundy.

Christina Applegate, of course, has been in countless projects since Married With Children ended in '97. Apart from the obvious huge film roles in Anchorman, Anchorman 2, The Sweetest Thing, Surviving Christmas, and Going the Distance, Applegate has been on multiple sitcoms, both headlining and guest-starring: She had a memorable stint as one of Rachel's sisters in Friends, she headlined Samantha Who? as the titular character Samantha, and she also starred alongside Will Arnett and Maya Rudolph in the cancelled-too-soon sitcom Up All Night.

Additionally, her battle with breast cancer in 2008 was highly-publicized in an effort to raise awareness for the disease, and she's heavily involved in multiple philanthropic efforts. Looks like Kelly Bundy wasn't so superficial after all.

David Faustino may not have been in the spotlight as much as his co-stars have been since the series ended, but he's been around in a few projects as of late: In 2010, he starred in a satirical comedy with Ed Asner titled Not Another B Movie, he lent his voice to The Legend of Korra, guest-starred on an episode of Modern Family with his former TV dad O'Neill, and she had a web-series back in 2009 titled Star-Ving which, as aforementioned, included one of the first Married With Children reunions.