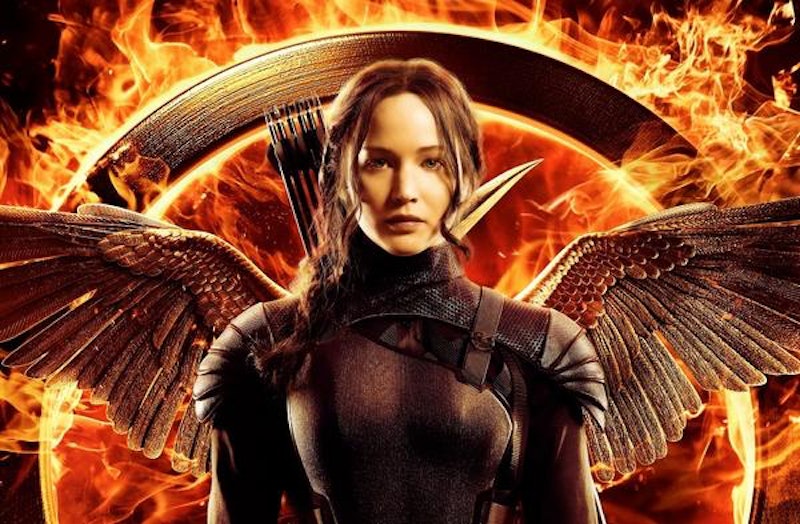 This poster features a Katniss that is actually facing the viewer. She's still wearing all black and standing in front of the same mockingjay symbol that all of the other rebels have been posing in front of, but, naturally, hers has been set ablaze. The overall effect makes Katniss seem like every bit of the fearless hero of the rebellion that everyone needs her to be and that's pretty much the point. Of course, Katniss' poster is so awesome that I can't help but think it must be inspiring a lot of jealousy. Sure, the other rebels might wish their posters could have been that cool, but I think the person who would have been most jealous of this poster is Katniss herself.

Look at that face. That's the face of a hero. And yet Katniss isn't feeling like much of a hero in Mockingjay. She has lost so much and will lose so much that half the time she's barely holding it together. The poster shows absolutely none of her internal struggle and makes her look about ten times more badass than she probably thinks she is, so excuse her for being a little jealous of this Katniss.

Katniss is a girl who is haunted by the deaths she endured and caused during the Hunger Games and the Quarter Quell. On top of that, Peeta got captured and she's feeling a lot of guilt and grief over that as well. Now take a look at poster!Katniss who, like the rest of the rebels, is posed in a way that make the mockingjay's wings look like angel wings behind her. This Katniss is an angel, this Katniss is a saint, this Katniss can do no wrong. Real Katniss probably hates her.

3. She doesn't need that weapon.

On all of the other rebel posters, each person was holding a weapon and looking like they were getting ready to start a fight. Katniss' arrows are on her back and practically out of view and yet she still looks like you wouldn't want to run into her in a dark alley with President Snow's symbol pinned on your lapel. Maybe it's the blazing fire behind her or maybe it's the way she's looking at you, but this Katniss inspires fear a lot more than the real life Katniss does.

Do you think poster!Katniss has ever gotten stress acne or had her complexion get all blotchy from crying too much? I know that Katniss doesn't really care about her looks, and certainly not as much as everyone else around her does, but this Katniss looks flawless. She looks like how you'd expect a hero to look, without a single imperfection to be found. Real Katniss could do without the photoshopping, but she wouldn't mind feeling flawless for a while. There's no Beyoncé in Panem to reassure her that she wakes up like that.

Katniss' original Mockingjay poster is probably a closer approximation of her mood throughout Mockingjay. The girl on the new poster looks more like the kind of girl you'd want to follow anywhere. Katniss doesn't look any more approachable on fire than she does standing basically in the dark with her back to us, but she at least looks a lot more exciting than she's feeling in her real (fake) life.