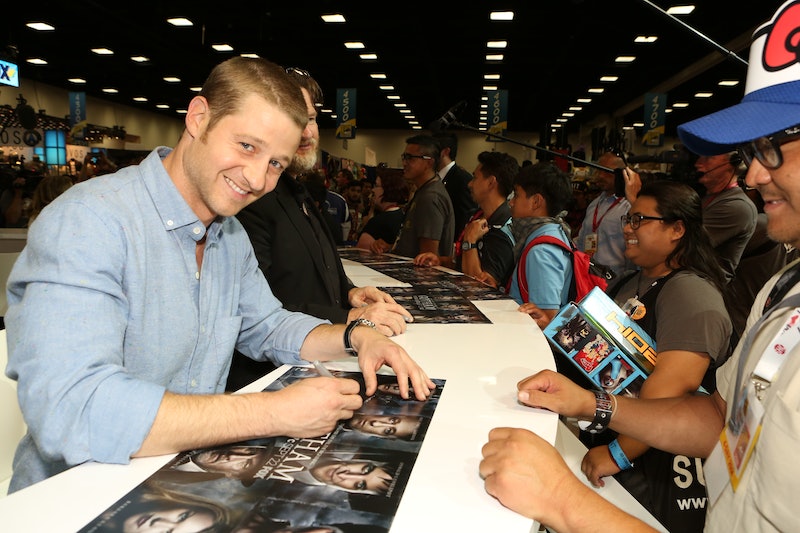 I’m seriously stoked for Fox’s new show, Gotham. Primarily because it will deal with the good ol’ criminally insane Batman villains, but also because it will be the return of a Fox show alum, Ben McKenzie. For those of you who don’t remember, McKenzie played Ryan Atwood, a poor teen from Chino who was taken off the streets by Peter Gallagher and his eyebrows. Ryan was adopted in by the Cohen family and raised along side their nerdy son Seth (Adam Brody) during their melodramatic high school formative years. It’s basically Gossip Girl’s West coast counterpart. And while my love for The O.C. might’ve waned as rich girl Marissa Cooper went haywire, I still held a small torch for McKenzie and Brody way past the show’s completion. Yes, even if Brody married Gossip Girl’s Leighton Meester this year, I still — wait a sec. Even, I wouldn’t dare steal Blair Waldorf’s man. I guess that leaves me to wonder if Ben McKenzie is dating anyone?

There were those rumors in early August of McKenzie dating Vampire Diaries ’ Nina Dobrev, since the newly single Dobrev and always smoldering McKenzie were seen hugging it out during San Diego’s Comic Con. Yet Dobrev was quick to make light of the rumors and posted a tweets about all of her "boyfriends."

Does that mean Ben McKenzie, aka Police Commissioner Gordon, is single? It's hard to say. He could be covertly taken. Maybe he's still got his heart in The O.C. as I'm sure many of us still do. What if Ryan decided to ditch his architecture career, change his name to Police Commissioner Gordon, and fight crime on the dirty, gang-filled streets of Gotham City? One of his old flames would surely join him.

Theresa was played by Navi Rawat and was Ryan's childhood friend and prom date. Rawat married in 2012 and no, Ryan did not burst through the chapel doors and interrupt the ceremony to object. Though that would be a perfect moment for The O.C. and an excellent way for these two to carry on their on-screen romance off into the sunset.

I don't think Ryan did ever get over Marissa's death. Seeing your true love die in your arms? Heck no he's not over her. McKenzie and Mischa Barton are clearly made for one another. Why isn't she on the new Gotham show? They could reunite on set and rekindle that flame behind the scenes.

Aw, remember Lindsay? She was Kirsten's half-sister from Caleb's affair with his secretary. Quelle dramatic! I liked Lindsay. She was really nice and sweet. It's sad that Chrismukkah was ruined when she found out her dad was Caleb though. Played by Shannon Lucio, I think that they definitely had great on-screen chemistry that would work IRL.

Sadie left Newport Beach so she wouldn't stand in the way of Ryan's college dreams, which is as selfless as you can get in high school. Where she went, I have no idea, but seeing as the actress, Nikki Reed, is dating Ian Somerhalder, McKenzie would have to get in line to woo her.

Played by Autumn Reeser, Taylor stood by as Ryan had to cope with Marissa's death, but all the while she loved him unconditionally. Le sigh, poor Taylor. The series ended a little ambiguously for these two as they shared a knowing glance at Summer and Seth's wedding. In real life, Reeser is married, but as any teen prime time drama dictates, nothing can get in the way of love.

Oh well. So maybe we will never know much about McKenzie's private life, and it looks like most of his O.C. costars are taken, but at least we can follow his new love interests when he takes on Gotham City.