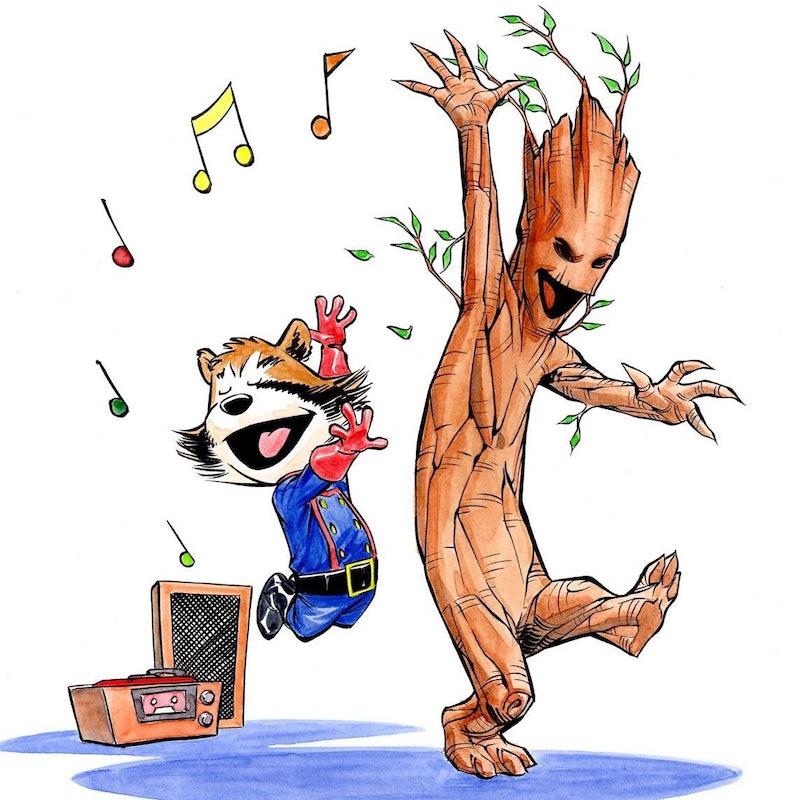 Once Rocket and Groot made their big-screen debut in Guardians of the Galaxy, they immediately captured America's hearts (and possibly their livers and spleens simply by accident). It's hard not to love the stoic humanoid tree (especially when he has an adorable baby form), and when paired with a tough-talking sentient raccoon that has a soft spot for him, it's almost impossible not to like these two characters.

But these two have a lot in common with another famous duo...sentient inanimate objects? Two friends with opposite personalities going through all sorts of shenanigans? It certainly sounds like a comic, but not any existing Marvel property...more like Calvin and Hobbes. At least, that's what artist Mike S. Miller was probably thinking when he reinterpreted the two superheroes as the iconic boy and his stuffed tiger.

It may be even more adorable than Dancing Baby Groot, if that's even possible. The two alien superheroes appear in the youthful style of Calvin and Hobbes on some of their iconic adventures: sledding, dancing, and playing with dart guns. Of course, this mix of friendship, youthful exuberance, and adorable alien outlaws can lead only to one question: can we please get a comic series with hilarious intergalactic buddies Rocket and Groot?

But all business aside, it'd also be great not only for these ensemble characters to get their moment in the spotlight, but to see them hang out on their off days...you know, when the galaxy isn't in danger. These two are already fun to watch when the world is in danger, so just imagine the kind of trouble they could get into off the clock.

Plus, it'd be great to explore the friendship between Groot and Rocket. Groot's backstory from the comics is already pretty interesting: he was exiled from his planet by killing one of his kind to protect a "Maintenance Mammal," a squirrel-like creature who is considered a lower life form on his planet (no wonder he's so attached to Rocket). And Rocket is the only creature that can understand Groot, since larynx is so stiff that anything he tries to say only sounds like "I am Groot."

So, since it seems like the Internet will already make anything Groot-related happen, why not a Calvin and Hobbes-esque series with buddies Rocket and Groot? As Groot would say: "I am Groot."