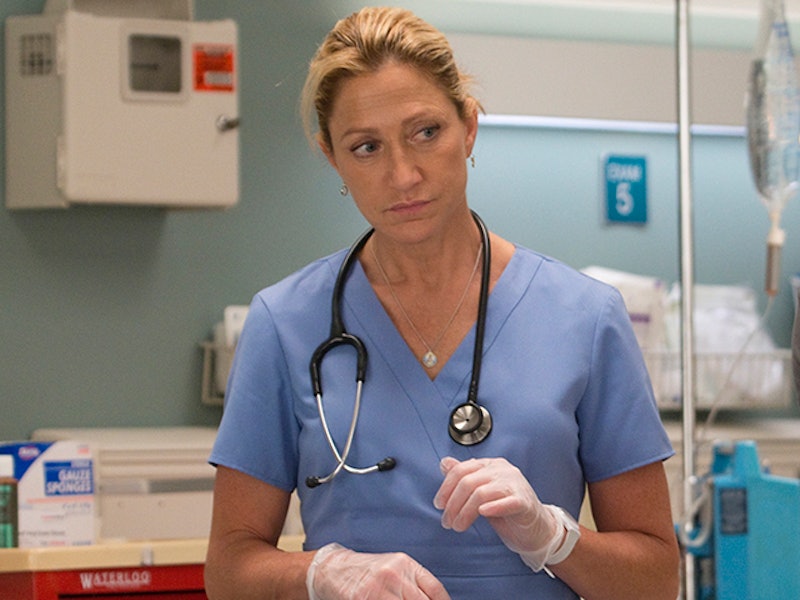 Get ready to hear the worst news you've heard since it was announced that The Sopranos was ending back in 2005. According to Deadline, Showtime is ending Nurse Jackie , their longtime drama starring Edie Falco as a mother, nurse, and occasional narcotics addict. It's the show that earned Falco her fourth Emmy in 2010, this one in the Outstanding Lead Actress in a Comedy Series category — and, as her previous three Emmys for The Sopranos were in the Outstanding Lead Actress in a Drama Series category, it also made her the only actress to win an Emmy in both categories. This show ending is such a tragedy.

"Edie is one of our finest actresses...we are so honored to have had her on the network," Showtime President David Nevins said in a statement confirming the news. "She creates indelible characters and Nurse Jackie Peyton is no exception. I know this final season will bring her story to a close that will satisfy the ever-growing number of loyal viewers who have been entranced and, at times, appalled by Jackie through the years."

I'm sure it will too, and I know shows have to end at some point, but...why does this one have to end?!

Also confirming the news was series star Stephen Wallem, who posted a sad tweet along with a picture of the cast during one of their last table reads:

At the very least, you can rest assured that your sorrow is shared with tons of other fans trying to deal with this news right now: Twitter pretty much started going crazy the second that the announcement was made official, and the #NurseJackie tag right now is pretty much a beacon of sadness right now. At least there are others who know how we're hurting.