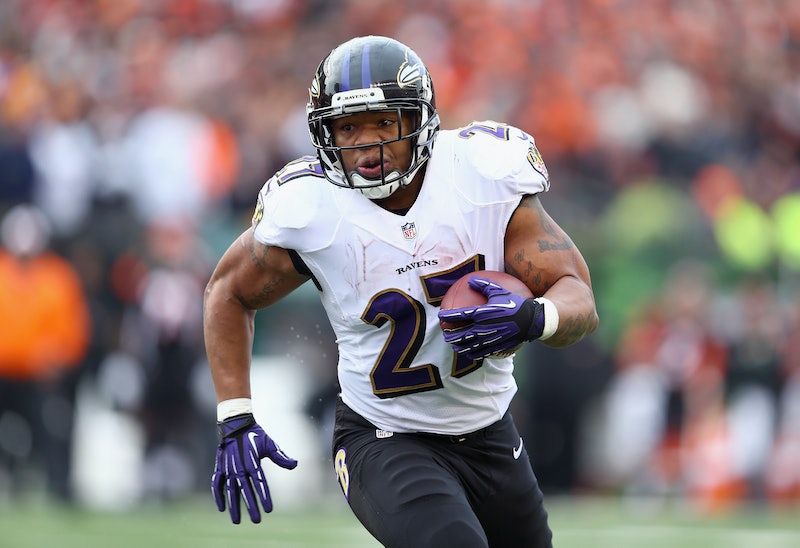 NFL officials said they didn't see the graphic video of former Baltimore Ravens running back Ray Rice punching his then-fiancee Janay Palmer in an Atlantic City casino elevator until this week, but it turns out the NFL had the tape for quite some time. According to The Associated Press, a law enforcement official sent the Ray Rice elevator video to the NFL in early April, and the football league confirmed the video was in their offices on April 9. It's still unclear whether or not an NFL executive actually watched the tape, but it raises more speculation over the league's possible mishandling of the domestic violence investigation.

The law enforcement official, speaking on condition of anonymity to The AP, said he sent a DVD copy of the elevator video to the NFL because he thought the league should have it for the ongoing investigation. The official reportedly has a 12-second voicemail from the NFL office confirming the arrival of the tape. On the voicemail, a female staffer says, “You’re right. It’s terrible.”

However, the law enforcement official doesn’t know if any NFL executives watched the video, and had no further contact with the football league. He also won't release the name of the NFL executive he sent the video to.

The NFL has continually denied seeing the graphic video of Rice knocking Palmer unconscious, her head hitting the elevator guardrail as she fell from the impact of his punch, before TMZ released it on Monday. The league claims it only saw the surveillance footage from outside the elevator — of Rice dragging the unconscious Palmer face-down on the floor — when it was released in February.

Rice, a popular player among "Rayvens Nation," was initially given a two-day suspension from the NFL. The Baltimore Ravens franchise also stood by him when his suspension was announced in July, saying they respected him as a player:

We respect the efforts Ray has made to become the best partner and father he can be. That night was not typical of the Ray Rice we know and respect. We believe that he will not let that one night define who he is, and he is determined to make sure something like this never happens again.

It wasn't until the violent video from inside the elevator was released on Monday that the NFL and the Baltimore Ravens decided to take a firmer stance on Rice and domestic violence. The Baltimore Ravens immediately terminated Rice's contract, and the NFL suspended him indefinitely.

In an exclusive interview with The Baltimore Sun, published on Wednesday, Ravens owner Steve Bisciotti admitted that he and his team mishandled the Rice investigation. “We all failed. I was kept abreast of every little thing that we were doing here," Bisciotti told The Sun.

Bisciotti added that team officials didn't see the full elevator video until TMZ released it on Monday. He called the video "disgusting."

The NFL is still under fire for taking so long to penalize Rice, who was indicted on aggravated assault charges in March (he later entered a pretrial deal). According to NFL Commissioner Roger Goodell, the league attempted to get a copy of the elevator video, but never received one.

Even if it's true that NFL executives didn't see the tape until Monday, there were still criminal charges against Rice indicating domestic violence occurred. ESPN reported that an Atlantic City police summons explicitly stated that Rice injured Palmer "by striking her with his hand, rendering her unconscious."

However, it seems the NFL and Baltimore Ravens didn't think a police report was enough to penalize Rice. Ravens president Dick Cass told The Sun on Wednesday that even though they read the police report, they needed more "facts," because how else would someone get knocked unconscious by a star football player?:

There’s a big difference between reading a report that says he knocked her unconscious or being told that someone had slapped someone and that she had hit her head. That is one version of the facts. That’s what we understood to be the case. When you see the video, it just looks very different than what we understood the facts to be.

The NFL's failure to properly penalize Rice months ago has sparked outrage among domestic violence survivors, sports pundits and football fans alike. In a statement on Wednesday, National Organization for Women President Terry O'Neill called for Goodell's resignation from the NFL, saying the league has "lost its way" and enables violence against women:

The only workable solution is for Roger Goodell to resign, and for his successor to appoint an independent investigator with full authority to gather factual data about domestic violence, dating violence, sexual assault and stalking within the NFL community, and to recommend real and lasting reforms. The NFL sets the example for college, high school, middle school and even elementary school football programs. And the example it is setting right now is simply unacceptable.

The response from NOW led ESPN commentator Stephen A. Smith, who previously found himself in hot water over statements made about women provoking abuse from men, to have an on-air meltdown. Smith called O'Neill "off her rocker" and "off her mind." "That's right, I said it," Smith said.