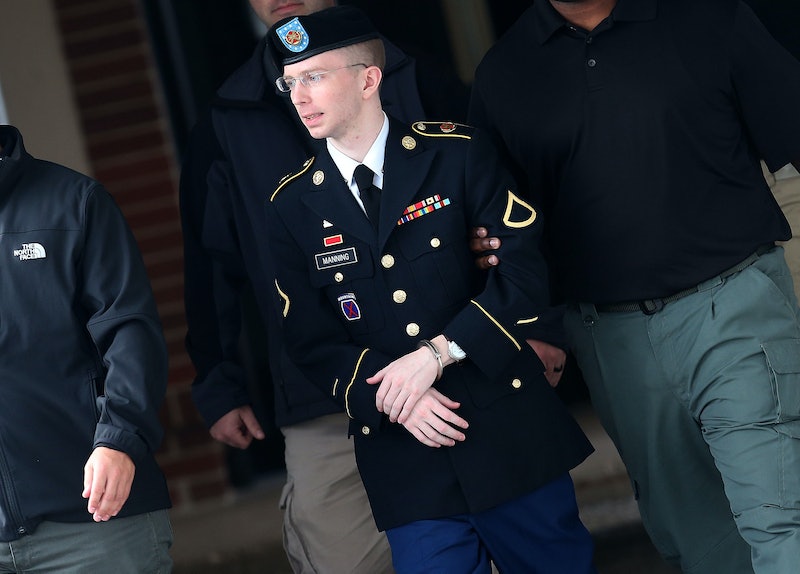 On Wednesday morning, WikiLeaks whistleblower Bradley Manning was sentenced to serve 35 years in prison by military judge Denise Lind. The U.S. administration had asked for Manning to receive — at the very least — a 60-year prison term, citing the "value in deterrence."

Manning could have received up to 90 years behind bars. He has already served three years in prison, and the judge awarded him 113 less days behind bars for his illegal period in solitary confinement. After serving seven years of his sentence, Manning will be eligible for parole.

His attorney, David Coombs, said during a press conference Wednesday afternoon that Manning's defense team would be asking President Obama for an official pardon — or, at least, a shorter sentence. But, he added, Manning was "cheerful" and understanding.

Though Coombs said he himself was "stunned," Manning consoled his team of lawyers. “He said, 'Hey It's OK. It's alright. I know you did everything you could for me. Don't cry. Be happy. It's fine. This is just a stage in my life. I am moving forward. I will recover from this.'"

Last month, Manning was convicted of violating the Espionage Act, amongst multiple other charges. In 2010, he was arrested for leaking more than 700,000 top-secret military documents to Julian Assange's WikiLeaks website. Manning's defense lawyers had asked for leniency, pointing to evidence that Manning was struggling with his gender identity and approaching a mental breakdown before the leak. They asked Lind to not hand down Manning more than 25 years.

Some analysts have asked why a junior intelligence analyst with demonstrated mental instability had access to hundreds of thousands of classified documents in the first place.

Commentators' responses have been divided. Lind's sentence is smack in the middle of what the Obama administration had asked for, and what Manning supporters had hoped for, so both parties are angry about the message sent by the sentence. There was no minimum sentence for his multiple convictions, so Lind had free reign to hand down whatever sentence she thought best. Of course, Twitter responded, with Lady Gaga herself even weighing in:

Had Manning been convicted of aiding the enemy, a charge he faced at trial, he would have spent life in prison without parole. The fact that his prison term is several decades long is still not a surprise to many, since Manning was convicted of most of the charges related to his mass leak.

Amongst the documents broadcast by WikiLeaks after Manning submitted them to Assange were tapes of airstrikes, diplomatic exchanges between powers, and the Iraq and Afghan War logs.

During the trial, evidence of Manning's confusion over his gender identity was revealed to the court — including a photograph of Manning wearing lipstick and a blonde wig. The picture was attached to an email Manning sent to his supervisor and therapist, entitled "My Problem:"

This is my problem. I’ve had signs of it for a very long time. It’s caused problems within my family. I thought a career in the military would get rid of it. It’s not something I seek out for attention, and I’ve been trying very, very hard to get rid of it by placing myself in situations where it would be impossible. But, it’s not going away; it’s haunting me more and more as I get older. Now, the consequences of it are dire, at a time when it’s causing me great pain it itself…

I don't know what to do anymore, and the only "help" that seems available is severe punishment and/or getting rid of me.

Manning's defense lawyers pointed blame at the army's restrictive "Don't Ask, Don't Tell" policy that was even more locked in place when Manning served. He was undergoing therapy and had expressed alarming psychological symptoms before the leak — "SPC Manning [shows] an altered or dissociated state of consciousness," read one memo — and at one point was found on the floor, alone, with a knife by his feet.

Manning has since apologized for his actions, saying that the time spent behind bars had brought him to the realization that leaking the classified files was naïve and idealistic. "I am sorry for unintended consequence of my actions," he told the court. "When I made these decisions, I believed I was going to help people, not hurt people."

The Obama administration is concerned about halting the flow of recent leaks — Manning is often compared to Edward Snowden, who will also be charged with violating the Espionage Act if he ever returns to America — and so asked for a particularly strict sentence to dissuade other would-be leakers.