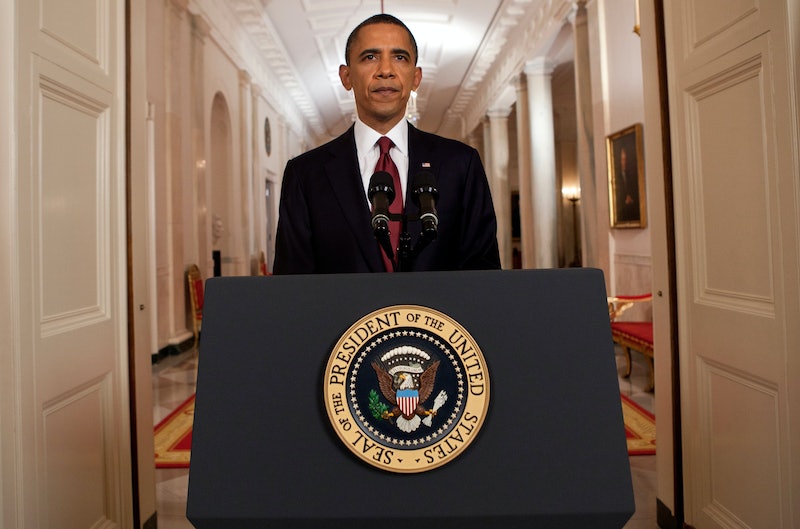 As threats from the Islamic State of Iraq and Syria linger over the international community, President Barack Obama took one of his firmest stances yet on the terrorist group responsible for killing thousands of people in Iraq and Syria, including two American journalists. On Wednesday, Obama laid out his plan to defeat ISIS — not through another war, but a four-point counterterrorism strategy that relies on funding, intelligence and international support. "We will degrade, and ultimately destroy, ISIL," the president said.

What Will Be Done

For the first part of his plan, Obama is authorizing airstrikes on ISIS targets in Syria, while the Iraq Security Force goes on the offense in Iraq. The president also said he wasn't afraid to "hunt down terrorists" in Iraq and Syria:

I will not hesitate to take action against ISIL in Syria, as well as Iraq. This is a core principle of my presidency: if you threaten America, you will find no safe haven.

In addition to the airstrikes, Obama will be sending 475 service members to Iraq. But this doesn't mean another war is in the works: Obama made it clear that this wasn't a boots-on-the-ground mission. The service members will aid and train Iraqi and Kurdish forces, as well as help Sunni communities regain their control from ISIS.

For the third part of his counterterrorism strategy, Obama said the U.S. will improve its intelligence and defenses to cut off funding from ISIS and block foreign fighters from joining the terrorist group in the Middle East. And for the fourth point, the U.S. will continue to provide humanitarian assistance to civilians in Iraq and Syria who've been affected by the ongoing strife.

The president also announced that the U.S. will lead an international coalition of allies that will join America in dismantling ISIS. "Already, allies are flying planes with us over Iraq; sending arms and assistance to Iraqi Security Forces and the Syrian opposition ... providing billions of dollars in humanitarian aid," Obama said.

He added that Secretary of State John Kerry was in Iraq on Wednesday, meeting with the new Iraqi government. Kerry will then travel across the Middle East and Europe to mobilize allies with ties to the Sunni community. "This is American leadership at its best," the president said, a running theme throughout his address.

On the eve of the 13th anniversary of 9/11, Obama was strong, sentimental and a bit idealistic as he reminded Americans that this was a time for unity, not "divisions and discord within our democracy." The president emphasized that the U.S. needs this unity at home to be a leader in the world:

America, our endless blessings bestow an enduring burden. But as Americans, we welcome our responsibility to lead. From Europe to Asia – from the far reaches of Africa to war-torn capitals of the Middle East – we stand for freedom, for justice, for dignity. These are values that have guided our nation since its founding. ... That is the difference we make in the world. And our own safety – our own security – depends upon our willingness to do what it takes to defend this nation, and uphold the values that we stand for – timeless ideals that will endure long after those who offer only hate and destruction have been vanquished from the Earth.

Although he ended on a note of determination, much of Obama's address was vague.

What He Left Out

For instance, the president didn't say which countries were involved in his international coalition, nor fully explain their long-term efforts. He mentioned that allies were already "flying planes" alongside the U.S. military, but didn't state if any U.S. allies are joining the U.S. in its airstrikes or overall military campaign.

The plans to curb foreigners from joining ISIS — and returning to their home countries — also went unexplained. Will the U.S. adopt anti-terrorist legislation like the United Kingdom did last week? Will there be any changes to immigration and customs in the coming weeks, or increased security at American and foreign airports?

The president also didn't address the hostages who are currently being held captive by ISIS, but this could as a way to protect their safety. For what we know of the missions to save James Foley and Steven Sotloff, the U.S. has been working behind closed doors to try to bring these hostages home.

And as for Congress, Obama reiterated the need for bipartisan support, but failed to explain what would happen if Congress didn't back him. Would it play out like 2013 all over again, when Obama asked for a vote to take military action against Syria, and then lost the vote?

Although Obama's relationship with Congress is pretty non-existent at this time, he did make it clear to both Congress and ISIS this week that he doesn't need any authorization to "eradicate the cancer" from this Earth.

More like this
President Zelensky Spoke Out On Ukraine's Chances Of Hosting Eurovision Next Year
By Sam Ramsden
What Is Barack Obama’s Net Worth? He Makes *Way* More Now As An Ex-President
By Hugh McIntyre
Michigan’s Governor Is “Going To Fight Like Hell” To Protect Abortion Access
By Andrea Zelinski
Kim Kardashian Remembers Her Last Words To Death Row Victim Brandon Bernard
By Jake Viswanath
Get Even More From Bustle — Sign Up For The Newsletter