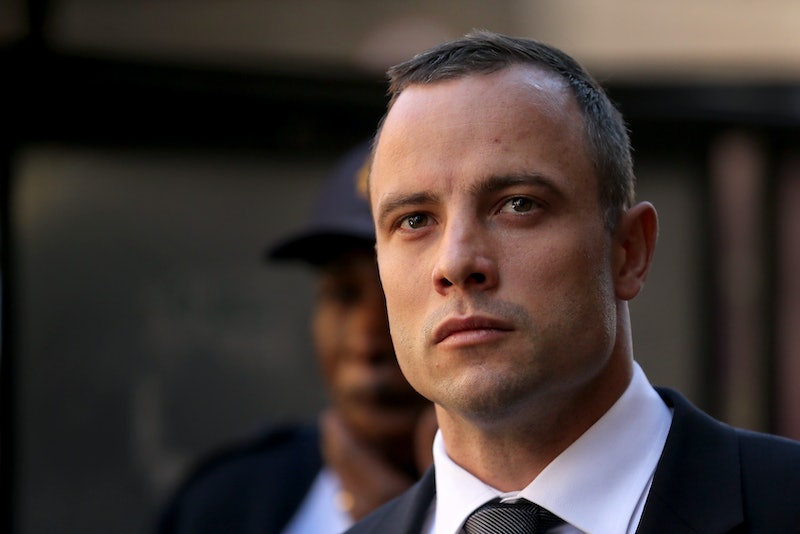 On Thursday, the highly publicized trial of Olympian Oscar Pistorius came to a startling near-close: the runner was found not guilty of murder, saving him from a lifetime of prison. After months of intense emotion, physical illness, psychiatric tests and multiple defense strategies, the athlete can now breathe a sigh of relief — whatever comes now, it's not the worst. But he's not the only one for whom today's rulings are a major game-changer: the reactions to the partial verdict on Pistorius' murder trial are on a wide spectrum; from tears to silence to impatience.

Though Judge Masipa's ruling today is a big deal, it's really tomorrow's verdict that will determine Pistorius' life for the next two decades. Yes, the Olympian isn't guilty of murder, premeditated or otherwise, but that doesn't mean he's out of the woods. In fact, just before calling for an unexpected adjournment for the rest of the day, Judge Masipa called Pistorius "negligent," indicating that a culpable homicide — essentially, manslaughter — verdict might be on the horizon. Tomorrow, Pistorius (and the world) will find out whether the athlete will spend up to 15 years in jail, or none at all.

Here's how the judge's decision was received.

The World, Via Social Media

Of course, Pistorius' trial has become such a media-blitzed affair that the partial verdict has evoked strong reactions from people across the world. Though many on Twitter are voicing disappointment — and rage— at the judge's not-guilty finding, most seem to just be frustrated about waiting another day. Because, you know, no one likes to wait on their entertainment.

Still, these reactions clearly reflect the trial's importance — as well as its place in the public eye.

As might be expected from the highly-strung and emotional athlete, when the judge said he wasn't guilty, he broke down into heavy sobs. In fact, he'd been crying since the verdict proceedings began. By the time the judge had rejected the murder charges, his shoulders were heaving.

By the time the judge called for the adjournment, Pistorius was reportedly exhausted, rubbing his head looking confused. Then again, wouldn't you be?

At the news of his son's not-guilty-of-murder verdict, Henke Pistorius took his daughter's hand and kissed it. Soon after, as the family waited for the judge to come back from her lunch break, Carl Pistorius — Oscar's brother, who arrived in a wheelchair after having suffered a car crash last month — turned around to wink at his brother.

Before they left, the family exchanged hugs and squeezes; the relief they must be feeling is unimaginable.

Of course, it was not a happy day for everyone. For June and Barry Steenkamp, the victim's parents, the partial verdict must have been hard to take. Other than giving Pistorius a stony look at the moment of the judge's ruling, the Steenkamps gave no reaction.