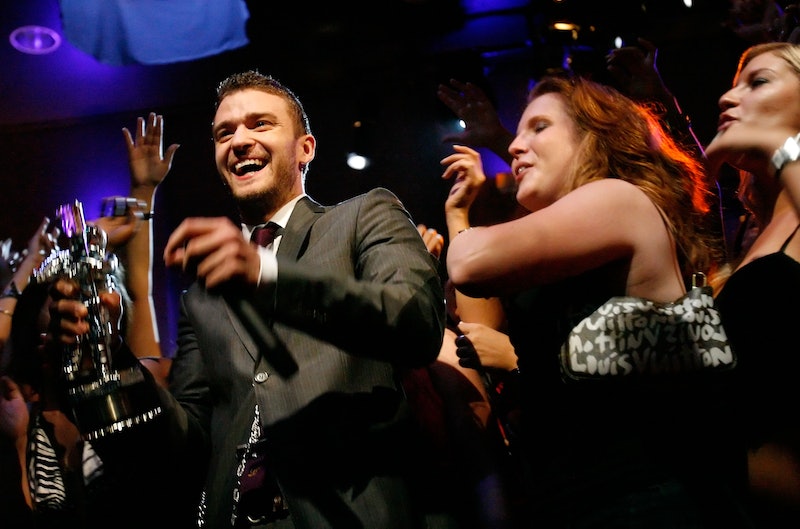 When Justin Timberlake steps onto the Barclay's Center stage to accept the MTV Video Music Awards' equivalent of a lifetime achievement award on Sunday night, we'll be looking back at his contributions to the world of music videos (and hoping those 'NSYNC rumors are true). But while we're on that topic, it's worth noting that JT is responsible for more than his fair share of memorable, and in many cases classic, VMA performances.

From making us swoon with his perfectly cut suits and smooth moves to crashing class with Britney Spears and his 'NSYNC band mates, Timberlake has a VMA performance for every disposition. Naturally, it's time to rank the former boy band star's VMA performances from worst (and yes, there is a worst) to best.

Where'd You Get That Grandpa Suit, Justin?

Perhaps Timberlake was a little rusty when he took the stage for this 2006 performance of "My Love" and "Sexy Back," but something was a little off. His dance moves weren't as mind-blowing as usual and his voice was almost shaky. Still, we were thirsting for JT and gobbled this up just as readily as ever — ill-cut suit and sneakers too. After all, sub-par Timberlake is still pretty incredible.

This 2002 performance was almost Justin's worst — and not because of his performance itself, but thanks to the wildly gyrating giant boom box beneath him. This was Timberlake's VMA debut as a solo artist, showing us that without having to match dance moves to his fellow 'NSYNC-mates, he was actually kind of amazing. It's just too bad that sound wave mic stand and the idea that some poor dancer had to stand inside the over-sized boom box to make the speakers move was clouding our vision.

To be fair, Timberlake isn't at the center of this performance, but he as integral piece of one of the most memorable VMA displays in history. This was back when he was just a baby celebrity, but he's giving those ridiculous early 2000s dance moves all he's got. Plus, we've got to give everyone involved major points for creativity and staying relevant to their school-aged audience. (And a few more points to JT for making zipper vests look cool.)

The Medley to End All Medleys

This 'NSYNC medley from 2000 stood a chance of making it to No. 1, but we've got to give solo Timberlake credit for commanding an entire stage by his lonesome. Still, this string of 'NSYNC hits, including the song many a teen cried herself to sleep over ("This I Promise You") and the rousing "It's Gonna Be Me" (pronounced "may"), was incredible enough to merit wearing out the VHS you taped it on.

His suit (minus the jacket) fits like a glove. His performance has a built-in dance break that could make anyone weak in the knees. His song choice is irrepressibly sexy. (Can't we all just be "Lovestoned"?) That last bit where Nelly Furtado joins Timberlake and Timbaland on stage in hopes of absorbing some of JT's sexy energy is a little strange, but it can't undo the magic that's just come before our eyes. This VMA performance is perfection.

That time JT beat-boxed alongside 'NSYNC while Michael Jackson danced like the maniac on the floor that he was. It wasn't really a Timberlake performance, but it was pretty great.