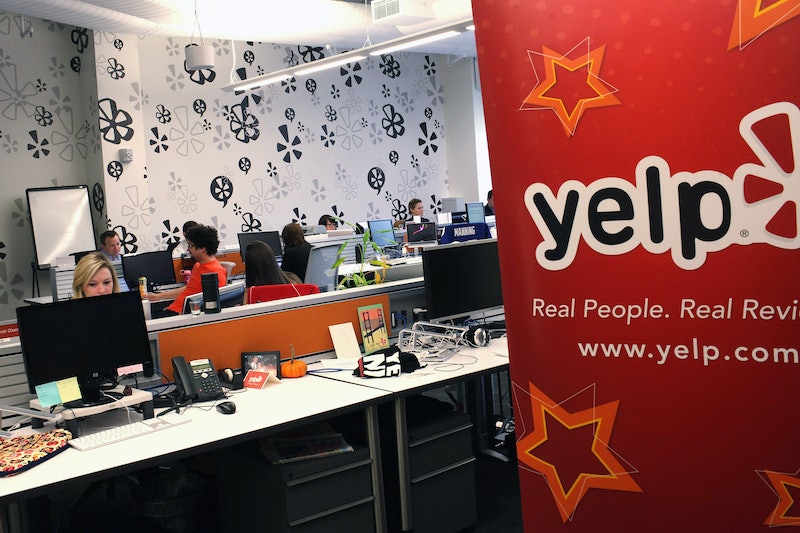 Yes, there are certain "rights" that I can do without. Being able to take my huge bottle of face wash on the plane with me, for example. (Though in a perfect world, I'd be able to.) But my right to give a bad restaurant a two-star rating? That's sacred. And for a while there, it was being messed with — thankfully, Governor Jerry Brown has stepped in with the so-called "Yelp bill," making it an offense in California to stop customers from posting bad reviews of businesses online.

If you're a millennial (or just, you know, used to the internet) you won't find it surprising that people rely heavily on online reviews in choosing where to spend their money. According to Forbes, 88 percent of people are impacted by online reviews, both negative and positive. (Believe it or not, in France, that number is higher — nine out of 10 customers will check a review before patronizing a business).

So, negative reviews are obviously important. They tell you when that sketchy tortilla place is actually sketchy, or just under-appreciated. But several businesses — worried about the negative impact of a bad review — have found ways to silence the reviewers. One New York B&B threatened ("jokingly," apparently) to fine their customers $500 for every negative review they put up. Another, more extreme (and famous) example is of a Utah couple who were threatened with $3,500 bill, unless they removed a negative comment they'd posted on RipoffReport.com. In France, a food blogger ended up in court for her negative review of a restaurant.

Which is where Brown's new law — the first of its kind in the U.S. — comes in. It bans businesses from having “non-disparagement” clauses in their contracts (which a lot do, but which most customers won't know about). Any company that tries to include that kind of provision will be fined $2,500. If they do it several times, they'll be fine another $5,000 each time.

That Time Someone Said A Hair Stylist Had Been Rude

A San Antonio beauty salon felt the heat after a reviewer posted what would seem like a fairly innocuous comment on Yelp. According to the Dallas News, one reviewer wrote:

I called the salon to make an appointment and spoke to the owner. She was rude and her tone gave me the impression she had something better to do. Needless to say she will not be getting any of my $$$.

Just because of this one review, which became popular online, the business began plummeting.

A popular New York restaurant saw both its ratings and its customer-base dip, after the waiter reportedly asked a customer to take off her Google Glass, and she posted an angry review about it. Kasmai wrote on Google Plus:

For the first time ever this place, Feast, in #NYC just asked that I remove +Google Glass because customers have complained of privacy concerns in the past. Never has happened to me before in the one year I've had Glass. I left.

The review got over a hundred comments, and the restaurant suffered a major popularity dip.

That Time Some Bad Review Shut Down a Whole Business

One anonynous commentator on the site Yelp-Sucks.com, where businesses describe their bad experiences with Yelp, had this story to tell.

Yelp ruined my business. We had always had 5 stars and worked from the ground up to get where we are. Long story short, I had to miss one event (which we had offered to do for free--the SECOND free event for this group in a month, which is how they found us). I had to cancel due to a severe family emergency. I found out a few days later that the entire community blasted 18 negative Yelp reviews, attacking me personally as well as my business, and on my business's FB page. Our bookings have dropped since, I have had to let people go because I haven't had work for them. I am now filing for bankruptcy and closing down my entire business.

So use your reviewing powers wisely, my friends.

More like this
How The City Healed Five Years On From The Manchester Arena Attack
By Ella Glover
Michigan’s Governor Is “Going To Fight Like Hell” To Protect Abortion Access
By Andrea Zelinski
The 'It's A Sin' Creator Revealed A Massive Detail That Didn't Make The Final Cut
By El Hunt
Plan C Vs. Plan B: What's The Difference?
By Lexi Inks
Get Even More From Bustle — Sign Up For The Newsletter