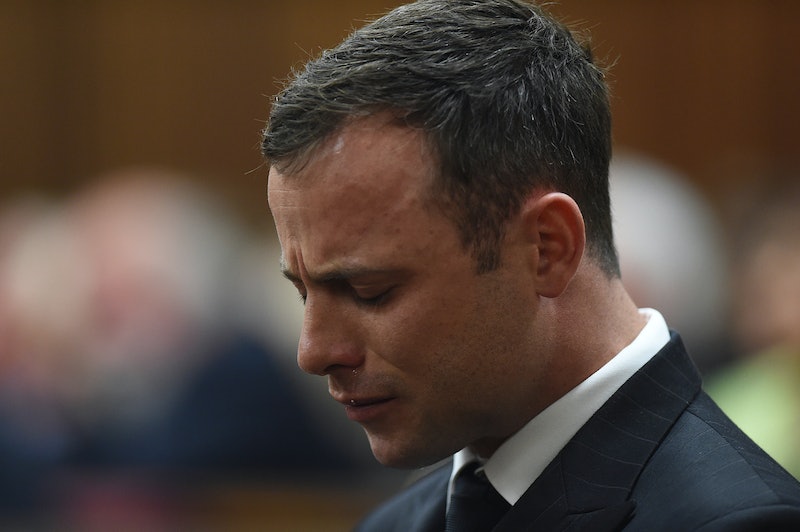 After five months of tears, screams, and meltdowns in the courtroom, Oscar Pistorius was able to heave a sigh of relief on Thursday when Judge Thokozile Masipa found Pistorius not guilty of murder. Judge Masipa found the South African Olympian, who shot and killed his girlfriend on Valentine's Day last year, negligent but not guilty of premeditated murder. In other words, she ruled Pistorius didn't mean to kill Reeva Steenkamp.

Pistorius admitted to firing four shots into his bathroom cubicle, in which Steenkamp had locked herself, but said he believed that the person behind the door was an intruder, not his girlfriend. He also insisted that he didn't consider the possibility that the shots would kill the person. While Judge Masipa ruled in favor of the first defense, she found Pistorius "negligent" in firing his gun.

Judge Masipa adjourned the proceedings for the day before reading a final verdict for Pistorius, which will likely be a lesser charge of culpable homicide, a charge similar to manslaughter in the U.S. Other charges that have yet to be ruled on include two counts of discharging a firearm in a public place and illegal possession of ammunition. At most, Pistorius could face 15 years in prison.

Before court proceedings resume on Friday, let's break down all the evidence — and lack of evidence — that cleared him of murder.

According to Pistorius and his defense team, the runner heard noises coming from the bathroom while thinking Steenkamp was in bed with him. Feeling vulnerable without his prosthetic legs, he reached for a 9mm under his bed and fired four shots into the bathroom. It was only after the shots that he discovered that it had been Steenkamp in the bathroom and who had been shot.

Based on the defendant's story, and the prosecution's inability to prove otherwise, Judge Masipa believed Pistorius genuinely thought that the person behind the bathroom door was an intruder and that Steenkamp was in the bedroom. Judge Masipa said:

The state clearly has not proved beyond reasonable doubt that the accused is guilty of premeditated murder. There are not enough facts.

A key component of the prosecution's case included testimonies from neighbors who claimed to have heard a man and a woman arguing before the shots were fired. They also claimed that the blood-curdling scream that followed the shots was actually that of a woman and not Pistorius.

After calling in an acoustics expert, it was determined that neighbors who were hundreds of meters away were unlikely to accurately differentiate between the high-pitched screams of a man and a woman. Judge Masipa said, "Technology is more reliable than human perception and human memory" while also pointing out that the victim's wound was "immediately incapacitating" and therefore she could not have screamed after the shots.

The prosecution team had offered WhatsApp chats as evidence that the couple's relationship was on the rocks, while the defense submitted contradicting text messages that showed affection between the two. However, Judge Masipa wisely pointed out that "normal relationships are dynamic and unpredictable sometimes." And, therefore, according to Masipa, this evidence proves nothing.